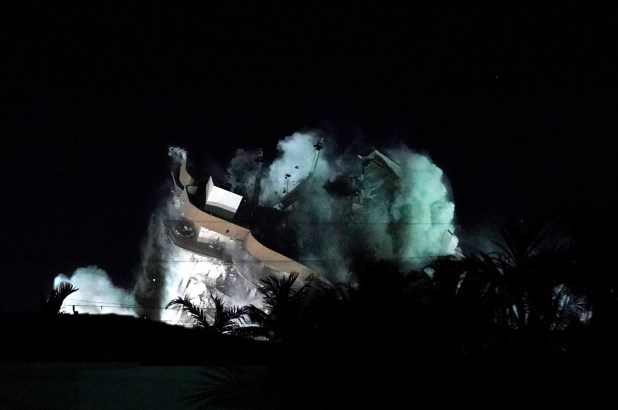 The precarious, remaining portion of a collapsed Florida condo building was demolished Sunday night — clearing the way for rescue teams to resume their search for any possible survivors.

The timing of the demolition of the unstable structure was announced just hours earlier by Miami-Dade Mayor Daniella Levine Cava, who said bringing the building down is necessary for work to continue at the site.

At about 10:30 p.m., the rigged explosives were set off, leveling the building and leaving behind a cloud of dust and debris over the area.

Over 24 people are confirmed dead from the June 24 collapse of the Champlain Towers South building in Surfside — and 121 people remain missing.

Rescuers will await the “all-clear” after the demolition and then immediately get back to work, Miami-Dade Mayor Daniella Levine Cava said at a briefing earlier Sunday.

“We are standing by. We are ready to go in, no matter the time of night,” Cava said.

Residents in the area were cautioned on Sunday to keep windows and doors closed to avoid having dust from the demolition enter their homes.