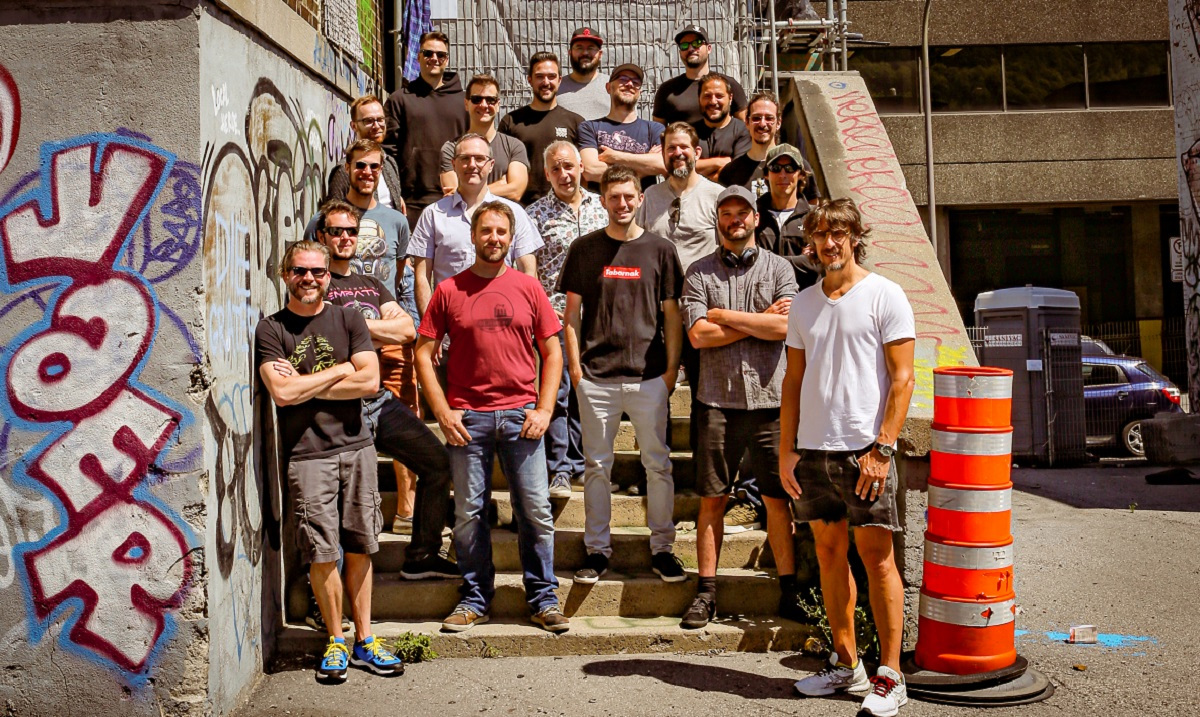 The makers of Journey to the Savage Planet have gotten back together in a new studio called Raccoon Logic.

The Montreal team was previously part of Typhoon Studios, which Google had previously acquired. But when Google gave up building first-party games for its Stadia cloud gaming service in February, it shut down Typhoon.

Alex Hutchinson, former creative director at Typhoon, is a cofounder of Raccoon Logic alongside Reid Schneider, studio head and former studio head at Typhoon. Their studio has about 15 people, mostly from Typhoon, and they have backing from Tencent.

In an interview with GamesBeat, Hutchinson and Schneider said they have a large initial investment but can’t say the exact amount. They have also secured the rights for Journey to the Savage Planet, an action-adventure sci-fi title with bright colors and a quirky sense of humor.

“We were the first last and only first party game shipped on Stadia,” Hutchinson said in an interview with GamesBeat. “We were very proud of that. We will at least be one line machine in the history of video games when someone does the book. But it was pretty surprising. It was kind of obvious if you read the tea leaves that Google was losing its interest in content. So it wasn’t 100% a surprise, but the timing and the speed of it was it was surprising.”

Above: The Raccoon Logic logo.

The team has previously held positions at Ubisoft, Electronic Arts, and WB Games among others. They aren’t talking about their game yet. Hutchinson was previously a creative director at Ubisoft Montreal, where he directed Far Cry 4 and Assassin’s Creed 3. Other past work includes Spore, The Sims 2, and Army of Two: The 40th Day for EA.

Schneider was previously a cofounder of WB Games Montreal where he served as the executive producer on Batman: Arkham Origins and Batman: Arkham Knight, Schneider’s other past work includes EA’s Army of Two and Army of Two: 40th Day, Battlefield Vietnam, and the original Splinter Cell.

“We felt like there was some unfinished business and we wanted to continue the work we had started,” Schneider said in an interview.

Another cofounder is Yannick Simard, chief technology officer. He was previously technical director at Typhoon Studios/Google. Prior to that, worked at Ubisoft in different lead programmer and technical lead roles on Watch Dogs and Watch Dogs 2. Other past work includes Army of Two, Army of Two: The 40th Day, and Spore Hero at EA, and lead engine programmer at Eidos.

Erick Bilodeau is art director and cofounder. He was previously head of art for Typhoon Studios/Google. He also worked at WB Games Montreal as a lead technical artist on Batman: Arkham Origins. Other work includes Shawn White Skate, Far Cry 2, and Mighty Quest for Epic Loot.

“As soon as the Google decision came down, we started talking about it,” Hutchinson said. “The upside of mass redundancy is you’re not trying to get people to quit their jobs. They no longer have one. So we were able to get back about 75% of the Typhoon crew. And we also started conversations with some really awesome new faces who are going to join us as well.”

Hutchinson said he was excited to be back in the indie game space. He said the team loves systemic games, games with a sense of humor and a big heart, and games with strong flavors that get reactions from players.

“We want it to be spicy,” Hutchinson said. “We want people to love it or hate it, we don’t want anyone to be bored.”

The new team will work in a hybrid in-person and remote model.

Schneider said he was happy to get the support from Google and Tencent, and he was proud that the team was able to ship Journey to the Savage planet on time and without crunch, or unpaid overtime.

“When we shipped Savage Planet (along with associated patches/DLC/etc) we did it in a really sustainable way without crunch,” Schneider said. “We even shifted to remote work in a matter of days in March 2020 thanks to the outstanding efforts of the team.”

As an example, at the outset of the pandemic, Typhoon chose to delay its downloadable content rather than overwork the team, Schneider said.

“We were all facing a new reality we had never experienced,” Schneider said. “The last thing we needed to do was add stress to our team members who now had kids at home, life in quarantine, and no clear end on the horizon. This is something we were really proud of and a goal we plan to 100% continue with Raccoon Logic. Our feeling is that people do their best creative work when they have time to re-charge and see their families. It’s better for people and better for the games we produce.”

The reset gave the company a chance to add positions it didn’t have before, like a producer and a lead designer.

“We’re talking about the types of experiences that we want to make, which are funny and weird — the types of things that are really, really hard to do if you’re part of a large multinational conglomerate,” Schneider said. “That’s the North Star, the guiding principle for what we do. We don’t know what our first title will be yet. But what feels great is that all that work we did can come back to us. Starting projects from a code base is always better than starting from scratch.”

What’s in a name?

Above: Don’t let their cute eyes fool you: These space chickens are deadly.

Asked why they named it Raccoon Logic, Hutchinson said, “It’s so hard to name things because every name in the world has been taken. It’s  very hard to find a fresh corner. So we decided to go left field on this one and just find something that was memorable. All the video game companies start to same sound the same. And now the logic is that if we make great games, it will be an awesome name. You know, and if we make terrible games, it really didn’t matter what we call it.”

The original game had about 2.5 million players, which was great for an indie game.

“We believe there was a good audience there,” Hutchinson said.

Hutchinson said Google was cool about releasing the intellectual property, but it took longer to get that deal done than to acquire Typhoon.

“It was really appreciated, as it becomes your baby,” Schneider said. “The team is really excited.”

The studio hasn’t felt any pressure from Tencent to make any particular kind of game. Hutchinson said the team is going for a kind of “systemic comedy,” where the humor is built into the systems behind the game. Being in a small company again will help develop that sense of humor.

“We were reminded that over the years, even though we’ve been successful at big companies, we’ve hit that sort of time where it’s more exciting and more fulfilling to do your own crazy, wacky ideas,” Hutchinson said. “So I think it was good to use the last vestige of corporate love we had left. It’s fun to be back out on our own.”