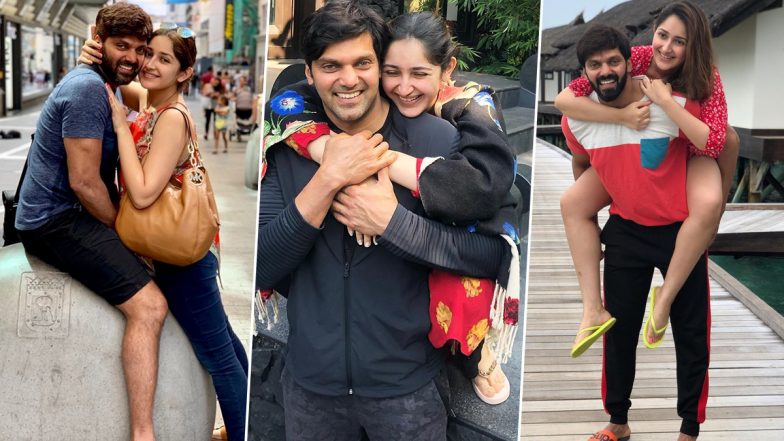 Sayyeshaa Saigal or more populalrly known as Sayyeshaa has been ruling the hearts of her audience ever since her first film. The actress, who mainly stars in South films, made her debut in the cinema industry with the Telugu film Akhil. While she is only a few movies old in the industry, Sayyeshaa has made sure she forays into every genre of film and every film industry. She made her Bollywood debut opposite Ajay Devgn in Shivaay. Her film, Vanamagan marked her Tamil debut. After impressing the audience with her stint in this film, the actress starred in films opposite many bigwigs. She was a part of Kadaikutty Singam with Karthi, Junga with Vijay Sethupathi and Ghajinikanth with Arya. Ghajinikanth was the movie where she met her husband, Arya. Sayyeshaa Saigal and Arya Confirm Their March Wedding in a Twitter Post on the Occasion of Valentine’s Day – View Pics.

Sayyeshaa Saigal is the grandniece of veteran actors Dilip Kumar and Saira Banu. It was on the occasion of Valentine’s Day 2019 that this lovely couple announced about their wedding. On March 10 the duo tied the knot in a grand ceremony at the Falaknuma Palace for which many leading stars of Kollywood were seen in attendance. It was just a year before getting hitched that Arya and Sayyeshaa met each other, on the sets of the Tamil film Ghajinikanth that released in 2018. On the occasion of Sayyeshaa’s birthday, let’s take a look at some of the adorable pictures of this lovely pair that proves that they are made for each other. Sayyeshaa Saigal–Arya Wedding Pictures: Suriya, Karthi Attend Saira Banu’s Grand-Niece’s Royal Ceremony.

The Magical Snaps From The Wedding Day

Some More Hugs And Love!

Love Is In The Air

Can They Get Any Cuter?

Sayyeshaa Saigal and Arya became parents to a baby girl last month. On the work front, Arya was last seen in filmmaker Pa Ranjith’s Tamil-language sports drama Sarpatta Parambarai. The film, which released on Amazon Prime Video last Friday, revolves around a clash between two clans in North Chennai and showcases the boxing culture of the region. As for the birthday girl, she is busy with mommy duties. Join us in wishing the star a very happy birthday.

(The above story first appeared on Stock Market Pioneer on Aug 12, 2021 09:44 AM IST. For more news and updates on politics, world, sports, entertainment and lifestyle, log on to our website stockmarketpioneer.com).