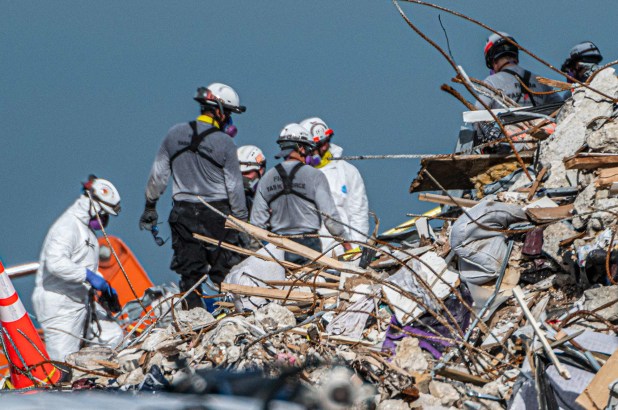 Search and rescue teams look through rubble at the partially collapsed Champlain Towers South in Surfside, Florida, on July 2, 2021.

Search-and-rescue operations have been suspended at the partially-collapsed condominium tower in South Florida, as the site is prepared for a prophylactic demolition ahead of a tropical storm.

No new bodies have been found, leaving the death toll at 24, while 121 are still missing.

“Search-and-rescue does have to pause temporarily, while the demolition preparation is underway,” Miami-Dade County Mayor Daniella Levine Cava said at a press conference Saturday evening.

“Preparation includes activities like drilling into columns in the unsafe structure. So it has been determined by our engineers and our fire department […] that we need to put a temporary pause [on search-and-rescue].”

“We will begin the search-and-rescue once again on any sections of the pile that are safe to access, as soon as we’re cleared,” she added.

An exact start-time for the demolition has yet to be set, Levine Cava said.

The National Institute of Standards and Technology is scrambling before the demolition to get as much data as possible as it tries to determine what caused the collapse.

Cava said NIST is “mobilizing with great haste to capture all possible information prior to this building coming down.”