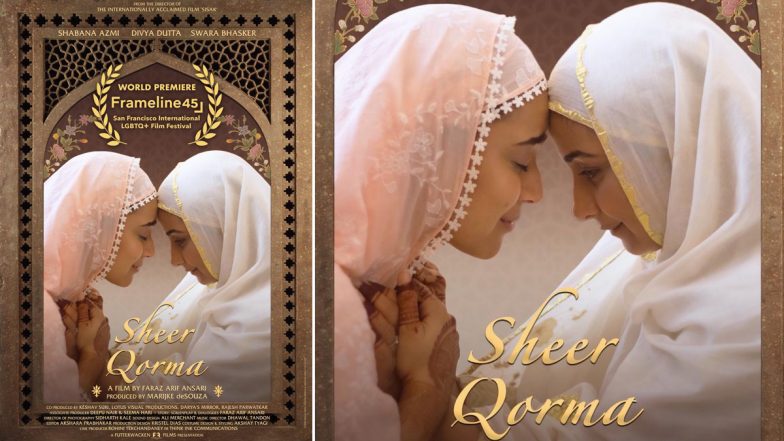 “We are extremely happy to see our labour of love transcending across borders and getting recognition at a globally celebrated platform like Indian Film Festival of Melbourne. In these gloomy times, this has come as a ray of happiness and hope,” added the actress. Sheer Qorma: Swara Bhasker, Divya Dutta’s LGBTQ+ Short Movie to Be Opening Film at Vienna’s International Queer Minorities Film Festival!

Directed by Faraz Arif Ansari, ‘Sheer Qorma’ is a story of belonging and acceptance, identity and family, and how it comes together under one roof, as resilient, queer Muslim women and non-binary characters of colour, choose to embrace love that exists beyond their personal beliefs and social moralities.

The film also stars Divya Dutta and Swara Bhasker. Divya calls it a “big deal” for ‘Sheer Qorma’ to be selected at the Indian Film Festival of Melbourne. “‘Sheer Qorma’ deserves all the accolades and love that it has been rightfully getting because it deserves only the best platforms and I am excited that the Australian audiences will get to see our powerful story of love and acceptance on the big screen in Melbourne,” Divya said.

Swara shared that she is “super excited” that ‘Sheer Qorma’ will have an Australian premiere. “This is such an honour for I feel ‘Sheer Qorma’ is a film that needs to be platformed well and celebrated across the globe for it champions a story of love and acceptance that should reach out to most audiences across the world for it is such a universal tale of our times,” Swara said.

Director Faraz Arif Ansari chipped in and expressed his excitement. “I am also thrilled that Masterchef Australia’s finalist Kishwar Chowdhury will be presenting the film in Melbourne… I am most certain that ‘Sheer Qorma’ is going to win many hearts in Melbourne!” Ansari concluded.

(The above story first appeared on Stock Market Pioneer on Aug 12, 2021 03:09 PM IST. For more news and updates on politics, world, sports, entertainment and lifestyle, log on to our website stockmarketpioneer.com).