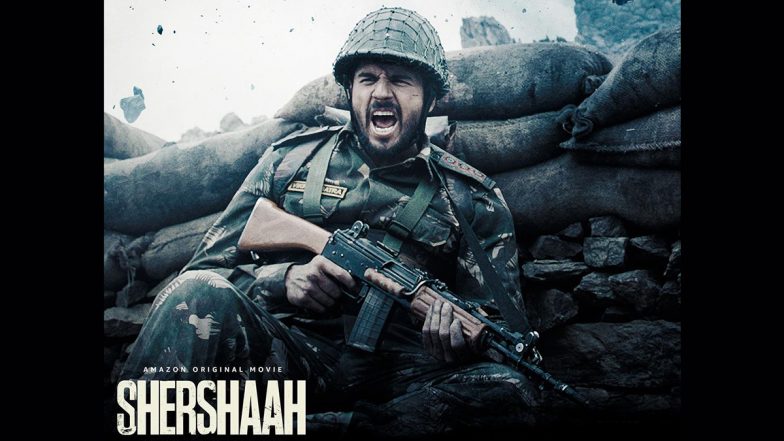 The biographical action drama Shershaah unfolds the events and emotions behind the Kargil war. The movie traces the story of Captain Vikram Batra and Dimple Cheema. Set in the 90s, the film will also shed light on the innocence of romance, bringing to screen the fresh and crackling chemistry of Kiara Advani and Sidharth Mahotra for the first time. The film released today (August 12) on Amazon Prime Video and is getting mixed reactions from critics who got to see the movie earlier. Shershaah Twitter Review: Sidharth Malhotra’s War Film Strikes the Right Chord With the Audience After Its Amazon Prime Video Release.

Check Out What They Have To Say About The Film:

Mint Lounge: Dharma Productions was responsible for Gunjan Saxena, a 2020 film about another Kargil war hero, which undercut traditional ideas of patriotic duty in the armed forces through a thoughtful conversation between the protagonist and her father. Shershaah, also by Dharma, has no such nuance.

NDTV: Mercifully, Shershaah does not resort to chest-thumping and flag-waving. It celebrates an intrepid soldier. The hero isn’t, however, given to either superficial swagger or bellicose bravado. He is the sort of clear-headed guy who knows what he has got to do and chips away at it with unwavering intent.

That, to a certain extent, is how the film is. Just a little more cinematic firepower and flint might have taken Shershaah much higher – and further – as a war drama.

Times Of India: The film’s overall tone is obviously high on patriotism. Many combat scenes don’t reflect the large canvas that the film is set up on, perhaps more deserving of a big screen experience. Yet, as an industry, Bollywood has seldom churned out epic war films that have been critically and commercially acclaimed. By those standards, ‘Shershaah’ ranks high than most of the recent war dramas and tells an inspiring story that needs to be told.

Hindustan Times: Call it producer Karan Johar’s sustained love for Fawad Khan or simply his good sense, but none of his ‘India-Pakistan’ movies — Raazi, Gunjan Saxena: The Kargil Girl, and this — can be faulted for playing to the gallery. Shershaah, regardless of how successful it is at condensing Captain Batra’s incredible life into two hours (not very, unfortunately), is a character study first. It’s a shame, then, that it can’t help but subdue the war hero’s natural fieriness with a distinct dollop of vanilla.

News18: In comparison, the recent Gunjan Saxena: The Kargil Girl was far more plucky and finely performed. As the father-daughter duo, Pankaj Tripathi and Jahnvi Kapoor were superb, and the film exuded novelty in a variety of ways. In the final analysis, Shershaah seems like an ode to a movie star! Shershaah Movie Review: Sidharth Malhotra’s Earnest Performance Shines in This Decent Retelling of Kargil Hero Captain Vikram Batra’s Heroics.

Moumita Bhattacharjee from our team also watched the film. She says, “Sidharth Malhotra’s industrious performance and Vishnu Vardhan’s reluctance to adhere to the exaggerated tropes of patriotic films in Hindi cinema elevates Shershaah to a dignified level. It’s a must for every fan of India and Bharat this Independence day. Shershaah is streaming on Amazon Prime Video.

(The above story first appeared on Stock Market Pioneer on Aug 12, 2021 11:30 AM IST. For more news and updates on politics, world, sports, entertainment and lifestyle, log on to our website stockmarketpioneer.com).