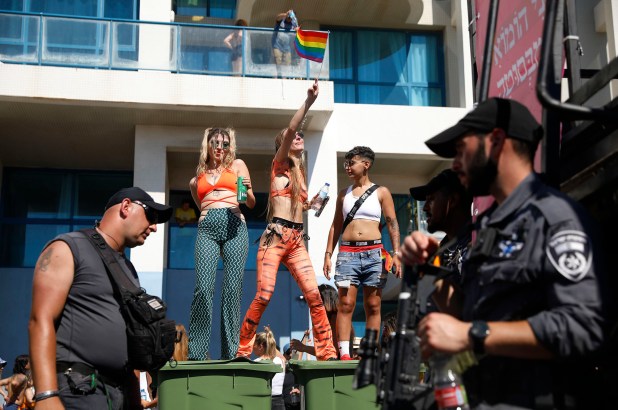 About 50 people were arrested in Tel Aviv Friday as police say they thwarted multiple attempts to disrupt an LGBTQ+ Pride parade, while a long-dormant movement resurfaced to protest the event.

Police say they arrested two residents of the Palestinian Authority who were in Israel illegally and carrying a knife, the Jerusalem Post reports. A Tel Aviv resident was arrested with a Taser, nunchucks, steel chains and an assortment of other weapons.

Thousands of people had descended on the city to celebrate at the parade.

Among those arrested was a couple who attacked a police officer while protesting the event.

Opposition to the parade was led by the Hazon movement, “which has been largely inactive for over a year” according to The Jerusalem Post.

The group appeared on Friday to protest with a person descending over the parade with a parachute that read “Father + Mother = Family.”

“We will get to as many people as possible with our message; it is our right to protest legitimately and legally against these abomination parades,” said Rabbi Dror Aryeh, one of the leaders in the Hazon movement.

Police say the 50 arrests were for attempting to cause harm or commit violence at the parade. The suspects will reportedly be brought to court for hearings to extend their arrests.