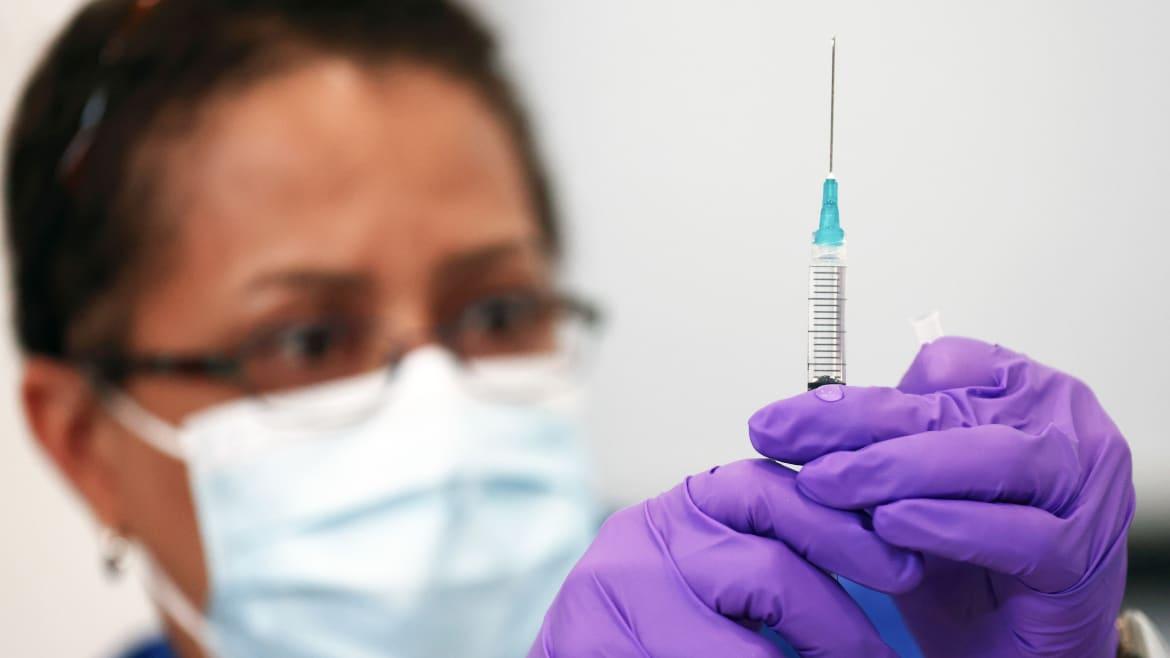 The U.S. Food and Drug Administration on Thursday authorized vaccine-eligible Americans with immune problems to receive a third dose of the safe and effective two-dose COVID-19 vaccines.

The move could lead to a surge in vaccinations as some of the most vulnerable Americans shore up their immune systems against increasingly dangerous new variants of the novel coronavirus. And experts broadly support it given the seemingly relentless surge of the Delta variant. But with some Americans already seeking out third doses on their own, the potential for a new surge of line-skipping by young, healthy people—even as much of the planet remains vaccine-deprived—loomed large.

“The FDA is especially cognizant that immunocompromised people are particularly at risk for severe disease,” acting commissioner Dr. Janet Woodcock said in a statement. “After a thorough review of the available data, the FDA determined that this small, vulnerable group may benefit from a third dose of the Pfizer-BioNTech or Moderna Vaccines.”

Experts hailed the booster move on its face.

The booster-authorization also signals a new approach to vaccination in the United States, where authorities encourage different regimens for different groups. “It is great to see agencies looking at data and identifying how to personalize vaccines to different people’s needs and underlying health conditions,” Jennifer Reich, a University of Colorado sociologist who studies immunization, told The Daily Beast.

Around three percent of Americans—around 10 million people—are immunocompromised. The FDA hasn’t yet authorized any Americans under 12 years old to get vaccinated, although that decision could come later this year as regulators finish analyzing trials and safety data.

Recipients of organ transplants are one of the groups the FDA has approved for a third shot of whichever mRNA vaccine—Pfizer’s or Moderna’s—they originally received, as the Associated Press reported. “A third dose of mRNA vaccine in transplant recipients had substantially higher immunogenicity than placebo,” a team of Canadian researchers concluded in correspondence with The New England Journal of Medicine after giving 120 transplantees a third dose of Moderna.

Experts stressed that authorization of a third dose for immunocompromised Americans does not mean two doses don’t work for everyone else. For most Americans, two doses is still highly effective at preventing serious infection, even by the extra-virulent Delta variant. “It is going to be really important that the logic behind this change is well-communicated,” Reich said.

Given CDC Director Rochelle Walensky’s own admission just this week that her agency has struggled to communicate effectively throughout the early months of the Biden presidency, the task before her agency and her colleagues at the FDA is a daunting one. On Friday, a CDC advisory committee was set to vote whether to recommend the third authorized dose, according to the New York Times.

Epidemiologists have been weighing the benefits and risks of booster shots for months now. But it wasn’t until the Delta variant of SARS-CoV-2 began spreading across the United States this summer that the FDA moved on the additional shot for vulnerable groups.

The benefit of an extra dose of Pfizer or Moderna is fairly obvious. The mRNA vaccines carry tiny scraps of genetic information that “teach” our immune systems how to recognize and defeat the SARS-CoV-2 pathogen. A booster dose is like a refresher course: It can help to strengthen and prolong an immune response.

The downside might be less obvious to residents of a vaccine-rich country.

It comes down to global supply. Already, by one CDC account reported by ABC News, a million people in the United States have successfully obtained a third dose of a two-dose vaccine. Now there’s some risk that vaccinated Americans with healthy immune systems will make a new run on the country’s pharmacies and clinics.

The FDA’s booster authorization “should not become a slippery slope where boosters start getting administered to people who are not at inordinate risk,” Irwin Redlener, the founding director of Columbia University’s National Center for Disaster Preparedness, told The Daily Beast.

To be clear, safety is almost certainly not an issue, even if third doses have not been studied as much as two-dose regimens. The mRNA vaccines have proved extremely safe across large-scale trials and follow-on studies. Hundreds of millions of people all over the world have gotten at least one dose of mRNA vaccine since the first jabs became available to the general public late last year.

The researchers in the early Canadian study found that “local and systemic events”—aching, slight fever and other minor side effects—were “slightly more common after the third dose of mRNA.” But there were no serious side effects. And “no cases of acute rejection occurred.”

Nor is supply an issue in the United States. The U.S. for months has had more doses than willing takers—in part because as many as a quarter of Americans say they won’t ever get vaccinated. Many cite misinformation spread by right-wing media and politicians, the same mess Walensky is battling from D.C.

Vaccine hostility reached fever pitch last month as the Biden administration rolled out a program empowering local volunteers to canvas vulnerable neighborhoods in order to encourage vaccination. Right-wingers compared the volunteers to the Gestapo. “What’s next? Knocking on your door to see if you own a gun?” tweeted U.S. Congressman Jim Jordan, an Ohio Republican.

Thanks mostly to anti-vaxxers, America has more doses than it needs. Globally, however, supply is a big problem. With richer countries spending billions of dollars to ensure their entire populations have access to the best jabs, many poorer countries haven’t been able to place orders. It’s not for no reason that the poorest countries rely heavily on donations of vaccines, often coordinated by COVAX, a global vaccine-distribution consortium.

Rich countries have pledged billions of dollars and hundreds of millions of doses to COVAX for onward shipment to under-vaccinated countries. By late July, the consortium had shipped more than 150 million doses to Latin America, Africa, and Central and Southeast Asia.

The United States donated 110 million of those doses. And in early August the White House announced its next pledge: a whopping half-billion doses of Pfizer that the U.S. will ship to 100 underserved countries.

But even those hundreds of millions of doses are a drop in a bucket in a world with more than seven billion people. Especially considering that population-level “herd immunity” might require 80 or 90 percent of a given community to either be fully vaccinated or have antibodies from prior infection—if it’s possible at all.

On average globally, a third of people have been fully vaccinated. But high vax rates in the richest countries—77 percent in Iceland, 71 percent in the U.K., nearly 60 percent in the U.S.—obscure very low rates in poorer ones. A lot of African countries are in the single digits.

The U.S. is flush with doses, but most countries aren’t. And that’s a good reason for Americans with healthy immune systems not to get an unnecessary third shot and potentially divert a limited supply of doses. If demand for jabs spikes in the United States because millions of people are getting boosters they don’t need, it could slow shipments to countries that are still trying to give people their first dose. After all, the contracts the U.S. government signed with the major vax-producers put the United States at the head of the line for supply.

In other words, some experts argue, Americans should think twice before adding to their hoard of jabs.

“Wealthy nations with an abundance of vaccine should not indulge themselves in booster shots until every nation has enough vaccine to give their citizens a chance to be protected from the scourge of COVID-19,” Redlener said.

That’s not just a matter of altruism. Humanity’s goal should be to eradicate SARS-CoV-2 globally or, failing that, to achieve a degree of planet-wide immunity that prevents runaway outbreaks.

Confused About Booster Shots? You Should Be.

Getting there requires even distribution of good vaccines across the globe. Right now we’re not even close.

“Herd immunity to completely eradicate the virus is proving very challenging in large part due to the high number of unvaccinated individuals around the world,” Elias Sayour, a University of Florida professor of neurosurgery and pediatrics and director of the school’s Pediatric Cancer Immunotherapy Initiative, told The Daily Beast.

Mutations exacerbate the problem. Big, under-vaccinated populations are veritable laboratories for the novel coronavirus as it evolves new and more dangerous lineages. Delta didn’t come from nowhere; it first appeared in India in late 2020 at a time when that country had practically no vaccine.

Of course, America’s own vaccine-holdouts are also a potential source of future lineages. Anti-vaxxers might be an intractable problem and a source of enduring risk for the vaccinated majority in the United States. But getting as many doses as possible as quickly as possible to eager takers in under-vaccinated countries protects Americans, too.

“Large, unvaccinated populations are breeding grounds for potentially terrible variants that will eventually find their way to every corner of the planet, including here,” Redlener said.

There might come a time when some future lineage offers a more robust challenge to the two-dose mRNA regimen. At that point, vaccinated Americans with healthy immune systems might become a priority for a booster.

But we’re not there yet. So if you’re a vaccinated, immunocompromised American over the age of 12, go get boosted. A third dose of Pfizer or Moderna is readily available—and it just might give you the extra protection you need against Delta and whatever lineages might come next.

If you’re a vaccinated American over 12 with a healthy immune system, relax. Mexicans, Bangladeshis, and Afghans need their first shot before you need your third.

Read more at The Daily Beast.

Get our top stories in your inbox every day. Sign up now!

Daily Beast Membership: Beast Inside goes deeper on the stories that matter to you. Learn more.