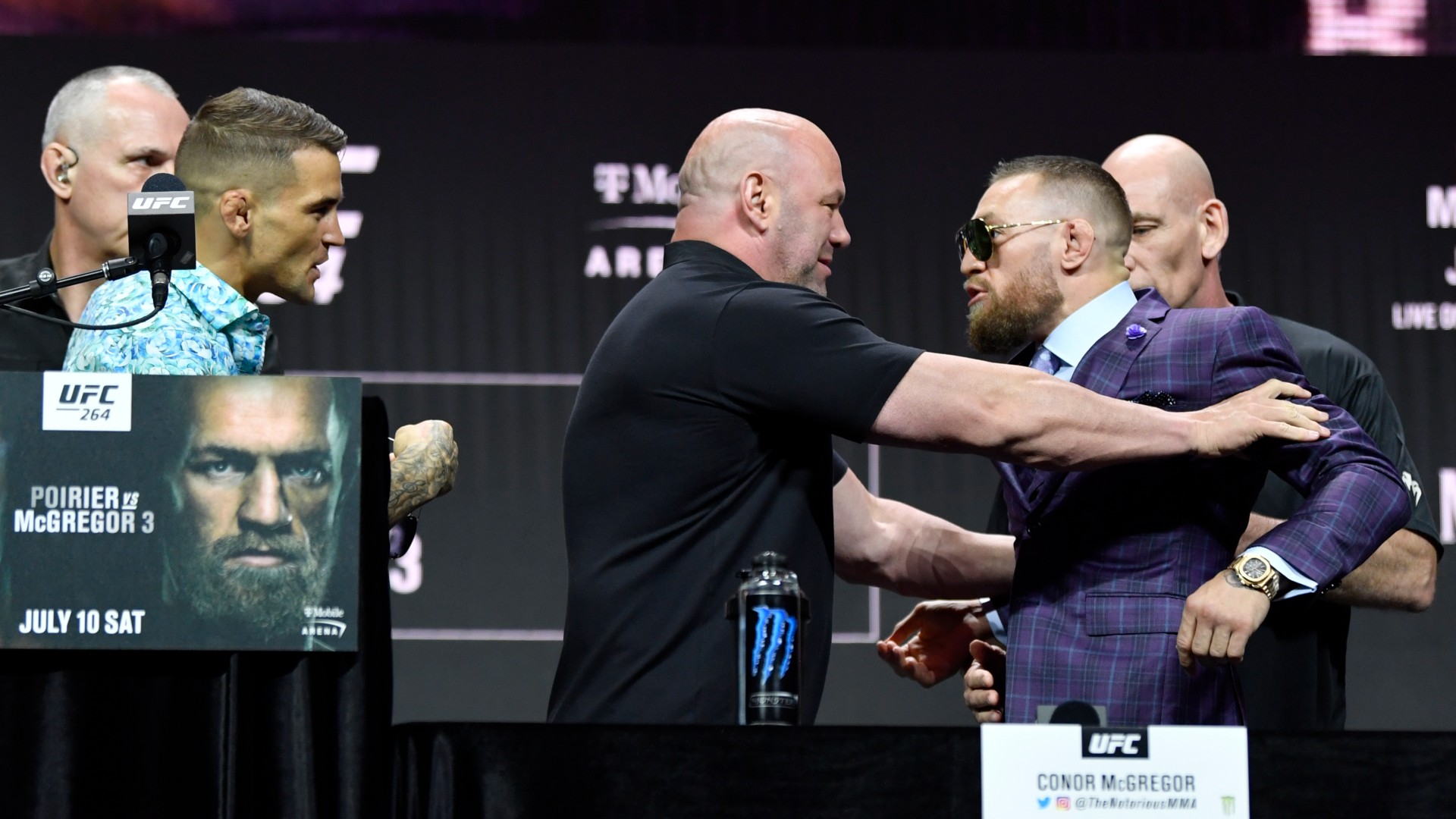 LAS VEGAS — For better or worse, the “old” Conor McGregor is back.

After two fights where the notoriously boisterous Irishman showed respect for his opponents, McGregor returned to his old ways ahead of his rubber match with Dustin Poirier. He put those antics on full display at the UFC 264 press conference. After appearing to turn over a new leaf against Donald Cerrone and Poirier with a polite approach, the McGregor that took the sports world by storm returned and pulled no punches in the build-up.

But is this attitude adjustment for Poirier or McGregor?

Ever since the trilogy fight was set for July 10, McGregor has ramped up the trash talk. At first, it seemed relatively harmless with the usual barrage of insults. But things took a sinister turn in the past week as McGregor dragged Poirier’s wife, Jolie, into the fray. By the time the two fighters hit the stage Thursday, McGregor’s temperament had reached a full boil.

After throwing a bottle of Poirier’s hot sauce into the crowd, McGregor charged toward his opponent as UFC president Dana White and event staff frantically tried to pull the fighters apart. After a skirmish was avoided, McGregor — decked out in a purple suit and sunglasses — launched one verbal grenade after another in an attempt to rattle Poirier.

McGregor did everything from calling Poirier “Buster Douglas” for what he deemed a fluke win in January, to threatening to pull his opponent’s head off his shoulders Saturday night.

To his credit, Poirier remained cool under fire. Unlike their first meeting, Poirier refused to allow McGregor to see that any of his words affected him. Instead, he picked his spots to return fire. When asked why he thought McGregor’s attitude changed for this fight, Poirier said, “Because he got knocked the f— out.

It was a familiar sight for the Irishman’s fans as well as for White, who has had a front-row seat to the McGregor show from ground zero to present day.

“Listen, I think that every version of Conor that has shown up over the last several years is always different,” White said. “He does what he’s got to do.”

But is this what he has to do? Is this the only way to find the “old” Conor McGregor inside the Octagon? Words can’t fight for you, but they sure can stir things up. But it certainly feels as if McGregor is looking to find himself more than getting into Poirier’s head.

“For me, the aura is not there anymore,” Poirier said. “Very dangerous fighter sitting right here, for sure. No doubt. But I see a man. You guys in the crowd, cheer it up — have fun. But I see a man sitting here in front of me that I have defeated and I know I can defeat again.”

It certainly feels like McGregor is chasing a high that he experienced before and recognizes that he needs that extra adrenaline rush to perform at the peak of his powers. Even if it doesn’t have the same effect on his opponent that it did when he defeated Poirier over six years ago, it brings McGregor back to a time when he dominated the MMA scene in and out of the Octagon. There was mutual respect in January, but McGregor clearly has no intentions of sharing that stance in the third fight. As for Poirier, he sees right through the antics and refuses to stoop to his opponent’s level.

“I do (respect) him,” Poirier said despite everything that was said. “I don’t hate anybody up here. I’m at a different place mentally, man. Respect to him and everything that he has done.”

Perhaps that’s what McGregor needs to operate at his full potential. It’s unknown if the barrage of insults and personal attacks will have any effect on Poirier entering the trilogy fight. But the element of finding familiarity and settling into a comfort zone seems to be very real.

And with the stakes as high as they are for Saturday’s fight, every little advantage matters.