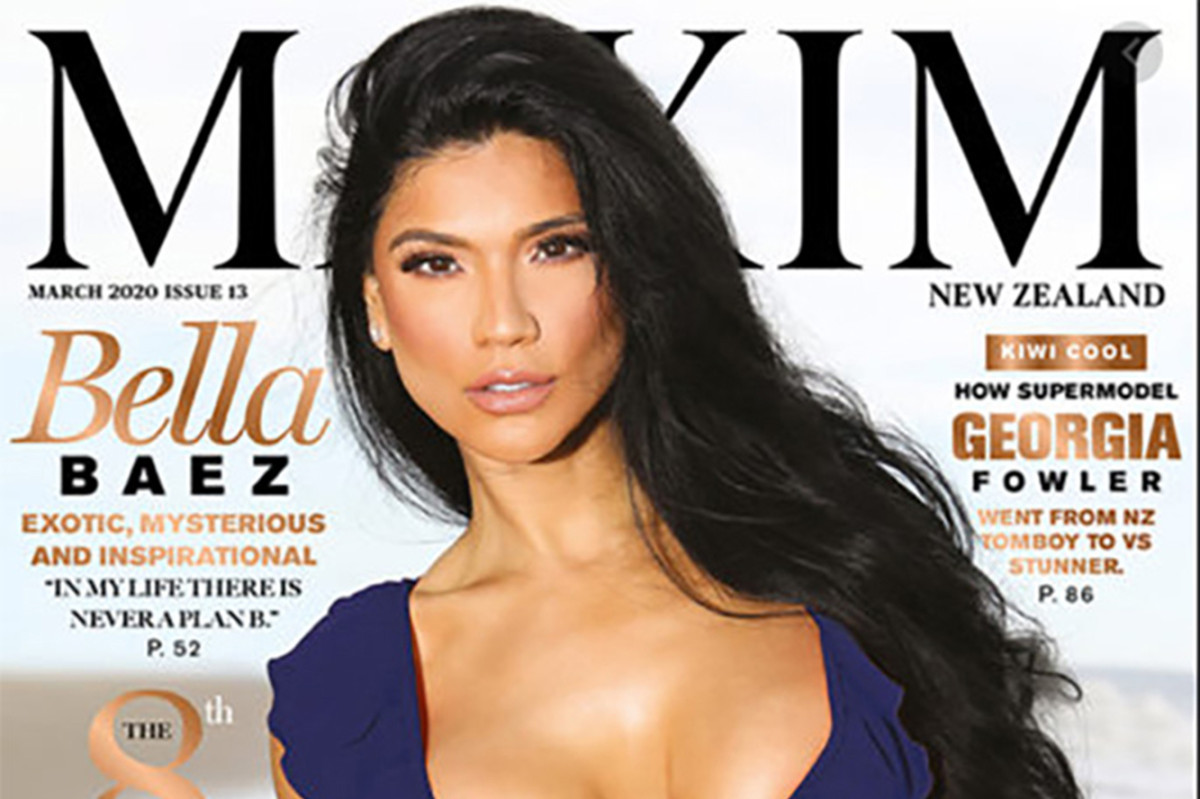 Any woman can be a magazine cover girl these days — if she’s willing to pony up the dough.

Juliet Amelia, a 45-year-old licensed massage therapist from Florida, looked like the hottest model around when she suddenly appeared on eight Playboy international editions — including Playboy Sweden, Playboy South Africa and Playboy New Zealand — during a 12-month period from 2018 to 2019.

Amelia — who now sells copies of these covers as well as other “uncensored images” on her website — also was splashed on the front page of British men’s magazine FHM in South Africa and Australia during the same period.

“Not even Pamela Anderson was on as many covers,” said Johnny Kortis, former editor and publisher of Playboy Slovakia.

Kortis claims Amelia would have added Playboy Slovakia to her collection except for the fact that he turned down a $10,000 offer by a photographer.

Playboy Slovakia is not for sale, said Kortis, who claims the practice was so rampant when he was running the magazine that he complained to headquarters, saying it was watering down the brand.

Playboy, which now only runs content online after dropping its print version last year, said it prohibits models from paying to appear in the magazine founded by Hugh Hefner in 1953.

“Playboy Enterprises does not condone the practice of charging models to be in our pages or those of our international editions,” said a Playboy spokeswoman. “This practice is counter to Playboy’s brand standards. We urge any model who has been approached to make us aware of the situation.”

Magazine covers are still jealously guarded terrain for editors of most US publications. But they are increasingly “for sale” in a shadowy overseas market where wannabe pinup girls are promised prime media real estate in exchange for a fee — often as much as $10,000, not including the cost of the wardrobe, makeup, shooting and editing, which is also paid for by the model.

Photographers often broker these transactions — collecting money from eager models and then shopping the glamor shots around to overseas versions of popular nudie magazines, sources said.

“Sometimes you pay the magazine these days and sometimes they do it for free depending on the girl, her social following, her looks and what’s going on in her life,” explained photographer Ryan Dwyer.

If the model is the girlfriend of a famous athlete, “they will do it for free,” Dwyer said. “If she’s Lacy the stripper from Vegas, they want to get paid.”

The practice of models paying for placement has blossomed thanks in part to social media sites like Instagram, where all that matters is the appearance of success. A cyber “cover” can help aspiring influencers gain social media followers, which can then lead to forms of revenue, like brand sponsorships.

And with readership in sharp decline, some magazines can no longer afford to finance splashy shoots in exotic locales, or pay big bucks for the publishing rights of an undiscovered beauty.

“I used to work and see a random hot girl in a coffee shop. Back then, I’d supply clothes and makeup and hair and pay for it all and then sell it to the magazines. I wasn’t just picking up any girl. I knew I could sell it and that’s how I’d get paid,” he said.

As magazine “budgets started to dwindle,” Dwyer realized he could make more money churning out covers for women willing to pay for the privilege.

“I went from shooting hot girls in London, UK and Rome to plastic-surgery chicks that wanted covers. I downgraded for sure quality-wise but financially [it] was the total opposite,” he said.

“Who doesn’t want to be on a cover of Maxim?” said Kaila Methven, who goes by the name Madame Methven and runs an LA-based lingerie company.

Cover girl for a “special travel edition” of Maxim South Africa in February 2018 and Playboy Mexico later that same year, Methven denies she ever paid for a cover. But the photographer behind her South Africa cover photo says the magazine didn’t hire him — Methven did.

“Her team reached out to me saying they wanted [me] to shoot her,” Irvin Rivera told The Post of Methven, who bills herself as a Kentucky Fried Chicken “heiress” since her family once owned a vast South African chicken farm that was a vendor to KFC.

At the end of the shoot, Methven paid for the photos she liked, including the one that landed her on the Maxim South Africa cover, he said.

Rivera said he wasn’t involved in getting the photo on the cover of the magazine. “She knows someone from there,” he said of Maxim South Africa.

Another model who has graced the cover of Maxim South Africa ended up suing the parent publication, claiming she was duped into a pay-to-play scheme that resulted in her forking over thousands of dollars only to find out she was being placed on “fake” covers.

Russian-born Marina Pahomova, also known as Marina Pamo, claims she was lured into the alleged scheme by photographer Brian B. Hayes, who sold himself online as the exclusive photographer for Maxim Middle East and Maxim South Africa.

“Some magazines … will ONLY publish my photos on their covers,” he allegedly wrote on his Facebook page in 2016. “We are proud to provide FREE submissions for those models who book photoshoots with me.”

Once contracted, Hayes told Pahomova she would need to pay $2,000 for a photo session so he could present the right kind of photos to Maxim, the lawsuit said.
Hayes then suggested a second photo session so Pahomova could have “other ‘looks’ for the other publications,” costing another $3,000.

After the second photo shoot was over, Hayes allegedly told Pahomova it would cost even more money to get her photos “on the cover and as a feature inside” Maxim magazine.

“Hayes represented to plaintiff that this procedure was a standard business practice including for Maxim,” the lawsuit said.

He directed her to wire $6,000 to his account and provided her with the wire instructions. To convince her to pay up, he told her he was friends with the editor of Maxim South Africa, Dirk Steenekamp, and even sent her a screenshot of an allegedly pre-approved Maxim South Africa cover with Pahomova as the cover model, the lawsuit said.

Pahomova was able to buy print editions of her May 2016 Maxim South Africa magazine cover. But she claims she was then conned into paying her way onto a slew of “fake Maxims” that were allegedly being produced in Muslim countries that had banned the mag from appearing on newsstands.

“Maxim is defrauding the general public into spending money on purchases of fake Maxims along with defrauding models and commercial advertising that paid for placements in fake Maxims, resulting in damage in the amount of several million dollars,” the lawsuit said.

Maxim, which didn’t respond to requests for comment, claims on its website that it has 27 overseas editions. None of them include the issues Pahomova flagged as fakes.

In her lawsuit, she said she believes Hayes duped “hundreds” of models over the years, and netted himself over $1.5 million.

When The Post called Pahomova last year, she said the suit was settled and abruptly hung up the phone. Maxim appears to have never issued a formal response to the lawsuit, which was settled in February 2020, court records show.

Neither Steenekamp nor Hayes returned requests for comment about Pahomova’s claims. But in the settlement, Hayes also acknowledged that he charged her $6,000 for her Maxim cover and he gave her back the rights to the 2,000 photos he took of her.

Pahomova was ordered by a judge to pay $15,000 in legal fees he racked up because she never showed up for any depositions, legal papers show.

The practice of paying for covers is condemned by the American Society of Magazine Editors, which boasts members from the nation’s top glossy magazines.

“ASME’s position on covers for sale — on any content — is: Don’t deceive the reader,” said Sid Hold, CEO of the trade association.

Of course, many pay-to-play covers live only in the cyber world with no magazine pages behind them, and therefore have no readers to deceive. Women are often paying for nothing more than a digital mockup with the magazine’s logo, headline and model that they can post on social media, sources said.

Photographer Joel Alvarez outed this practice in 2019 when he railed on Facebook against a “mock cover” he claims he shot for Maxim France under then-owner Florent Carmin.

“Even though Maxim France never actually went into circulation it’s still nice to see my work on a mock cover,” Alvarez wrote. “But I’ve noticed a lot of [people] posting and even believing that Maxim France is an actual publication.”

The bare-bones cover offers little more than a picture of Munroe, who boasts 102,000 Instagram followers, with a headline in French that translates roughly to: “The bombshell is the type to be respected.” The cover doesn’t even have a date.

Munroe told The Post she didn’t pay for her cover and was stunned when The Post informed her that there may have been no magazine pages behind it. She said she did the photo shoot in LA with Alvarez and Carmin, believing it was for a print edition of the mag.

“I’ve never paid for a publication in my life. If someone paid for something for me, I was not aware of that, nor would I ask them to do that,” Munroe said. The Maxim France “cover” was removed from Munroe’s Instagram page after The Post contacted her.

But when reached by The Post, Carmin said he is no longer in charge of Maxim France after getting heat from Maxim USA over the way he was running the business. He said his problems with the home office began shortly after The Post began contacting Maxim US with questions about his operation back in 2020.

In an interview, Carmin acknowledged that he did “very few” print editions of the magazine after landing the Maxim France license in 2018. He said he did lots of “digital covers,” often producing several “covers” in a single month.

Carmin also insisted he never took money directly from models to appear on his cyber covers. He only acknowledged being paid by “sponsors” of models.

In the case of Munroe, Carmin said he did the shoot as a “favor” to Alvarez, not in exchange for money.

While the pay-for-play model of magazine covers can be exploitative, some women walk away feeling richer than ever — as was the case for Santa Monica-based fitness buff Bella Baez, who appeared on Maxim New Zealand’s cover in 2019.

The California native said she paid $12,000 to be featured on the cover and an inside spread that included an inspiring Q&A about her battle with depression after “a broken heart,” and how it led her to get in the best shape of her life and compete in Miss Bikini competitions.

She said she paid $2,000 for the photo shoot with Hayes, the photographer named in the Pahomova suit. Another $10,000 was “for Maxim to get published and to get a page spread.”

And she doesn’t regret it for a second.

One reason is that it was cathartic. To pay for the cover and spread, Baez sold Chanel bags she got from the same ex-fiancé who sent her spiraling into depression after they broke up in 2016.

“It’s just materialistic things,” she said of the designer bags. “I wanted to share my story and I wanted to inspire people so that, to me, is worth more than a single bag.”