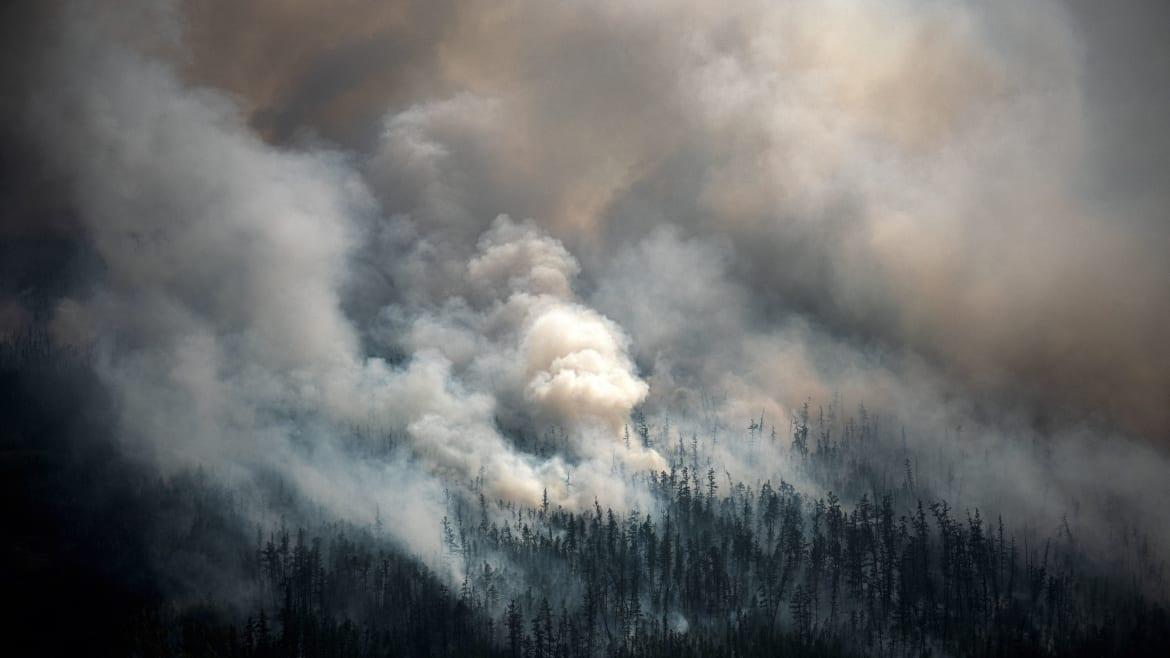 The fires, which started in May in Yakutia, are now larger than all wildfires around the planet combined, according to Greenpeace. There is no official death toll yet, but at least five people have died so far.

For months, Russian authorities have been saying that the situation was under control. Finally, on Thursday, the minister of Emergency Situations, Yevgeny Zinichev, traveled to the epicenter of the disaster in Yakutia and concluded: the fires will reach Moscow, if nobody stops it.

There are more than 3,000 miles between Moscow and Yakutia, a republic four times bigger than France located in north-eastern Siberia. It is one of the coldest places on the planet in winter time. But this summer has been unusually hot, with unprecedented droughts and strong winds fueling the disaster.

On Wednesday, a local tractor driver died fighting the fire in Yakutia, which has been burning for weeks. Many locals blame the Kremlin for not doing enough to help the burning north. “Russia is a huge power. Every year it demonstrates its military power but cannot put out the fires. Or does it not want to?,” a prominent Yakutia politician, Sardana Avksentyeva, wrote in a Thursday Instagram post.

When Avksentyeva started posting photographs of wildfires on June 8, she was convinced that the special forces of the emergency ministry, known as MCHS, would handle the problem. But by Aug. 1, houses were still burning and animals were still dying as 163 fires raged around the republic.

“It seems the authorities are simply waiting for august rains to put down the fires. MCHS, are you alive?” she wrote on Instagram. “All our pleas to announce the emergency situation were left unanswered.”

Meanwhile, Moscow has been focused on upcoming parliament elections—and on persecuting the opposition. Yakutia had to fight the fires using only its own local budget. “This is a lesson to all the other Russian regions: do not wait for the center’s help, count only on yourself,”

The leader of Greenpeace Russia’s firefighting team, Grigory Kuksin, says that the government is to be blamed for the lack of funding to manage the disaster.

“Russia spends about 30 billion rubles on preventing fires and training regional forest firefighting teams, but the budget should be at least three times bigger,” Kuksin told The Daily Beast on Thursday.

He added: “Professional firefighters cannot appear from nowhere, they should have been trained. The aftermath of lives lost, as a result of these fires, will number thousands, since several cities are now suffering from smoke.”

Every day, Polina Pavlova, a volunteer from the devastated region of Berdigestyakh, posts emergency phone numbers, calls for volunteers, and posts photographs of her smoky village, which has been receiving hundreds of evacuated victims. Local authorities provide aid for pregnant women, little children, and others whose homes have burnt in the wildfire. “There is so much smoke, we cannot see the sun,” Pavlova posted on Facebook on Wednesday.

“Right now, there are about 5,000 people fighting the wildfires around one million kilometers of burning woods in Yakutia, at least 3,000 of them are local volunteers,” Bagdan Bakaleiko, a Rain TV journalist covering the crisis in Yakutia, told The Daily Beast. “Firefighters tell us that everything that has never burnt before is burning now.”

The entire village of Byas-Kyuel has burnt to the ground. Flames destroyed 31 houses, and at least 400 people were evacuated to temporary shelters. Authorities promise to build new homes for the victims by October. Reporters from News.Yukt.ru compare the scene in the ruined village to an “apocalypse.” Meanwhile, the smoke has reached the republic capital of Yakutsk. The IQAir monitors suggest that the concentration of toxic smoke pollution in the air is 247 times than the recommended norm.

Several other Russian regions are suffering from wildfires in the Urals, Far East and in the central parts of Russia. Earlier this month, wildfires spread in the national park of Republic of Mordovia, 352 miles away from Moscow. This week, the fires reached Alamasovo village in the Nizhny Novgorod region.

“Until recently the Kremlin did not pay much attention to wildfires, but considered the significance of climate changes,” Kuksin said. “Russian authorities should be focusing harder and spending bigger budgets on fire prevention, and training professional wood firefighters.”

Read more at The Daily Beast.

Get our top stories in your inbox every day. Sign up now!

Daily Beast Membership: Beast Inside goes deeper on the stories that matter to you. Learn more.