UFC lightweight contender Islam Makhachev has revealed that Khabib Nurmagomedov put pressure on him throughout his fight against Thiago Moises at UFC Vegas 31.

In a post-fight interview, Makhachev stated that ‘The Eagle’ kept telling the 29-year-old to take the fight to the ground.

“This guy [Khabib Nurmagomedov] pressured me all four rounds. ‘Take him down, take him, take him down.’ I just wanna strike with him a little bit, but this guy pressure me, you know.” Islam Makhachev said.

Nurmagomedov and Makhachev are childhood friends who grew up together and trained under Khabib’s father, Abdulmanap Nurmagomedov.

In the post-fight interview, the 20-1 fighter revealed the advice his coach Abdulmanap used to give Makhachev.

“My coach Abdulmanap [Nurmagomedov] always tell me, ‘You have much better [skills] than anybody. Wrestling skills, grappling skills, use your skills.'”

Makhachev named Tony Ferguson, Michael Chandler, and Rafael dos Anjos as the three fighters he’d like to face next. The Dagestani fighter said Chandler would be number one on his list of next opponents.

“He [Michael Chandler] has [a] good name, like he’s good now…I think Chandler is [a] very interesting fight for me. Everybody talk about him, he fight for the title couple of months ago. That’s why.” Islam Makhachev added.

The 29-year-old also believes that when he gets the title shot, it will be against Dustin Poirier.

“I think [Dustin] Poirier. Because this guy have crazy experience, he have good skills, you know.” 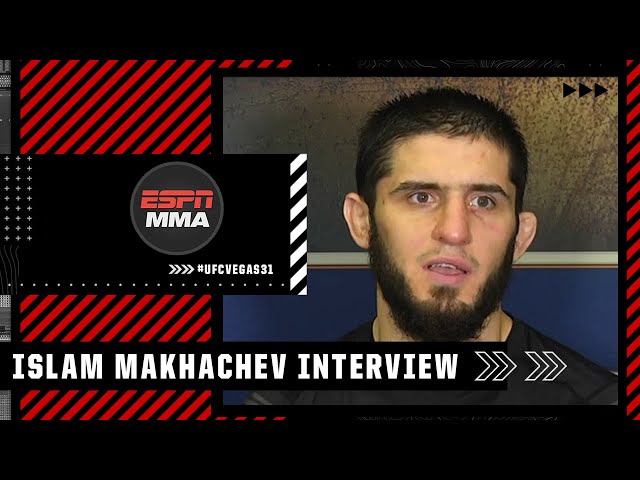 With a win at UFC Vegas 31, Islam Makhachev extends his winning streak to eight

Islam Makhachev put on a dominant performance against Thiago Moises in the main event of UFC Vegas 31. After controlling most of the fight, the Dagestani fighter finished Moises via submission in the fourth round. This was Makhachev’s first time headlining a UFC main event.

With the victory, the 29-year-old is now riding an impressive eight-fight winning streak. He was ranked No.9 in the lightweight division coming into the fight. Makhachev will undoubtedly look to face an opponent from the division’s top 5 next.