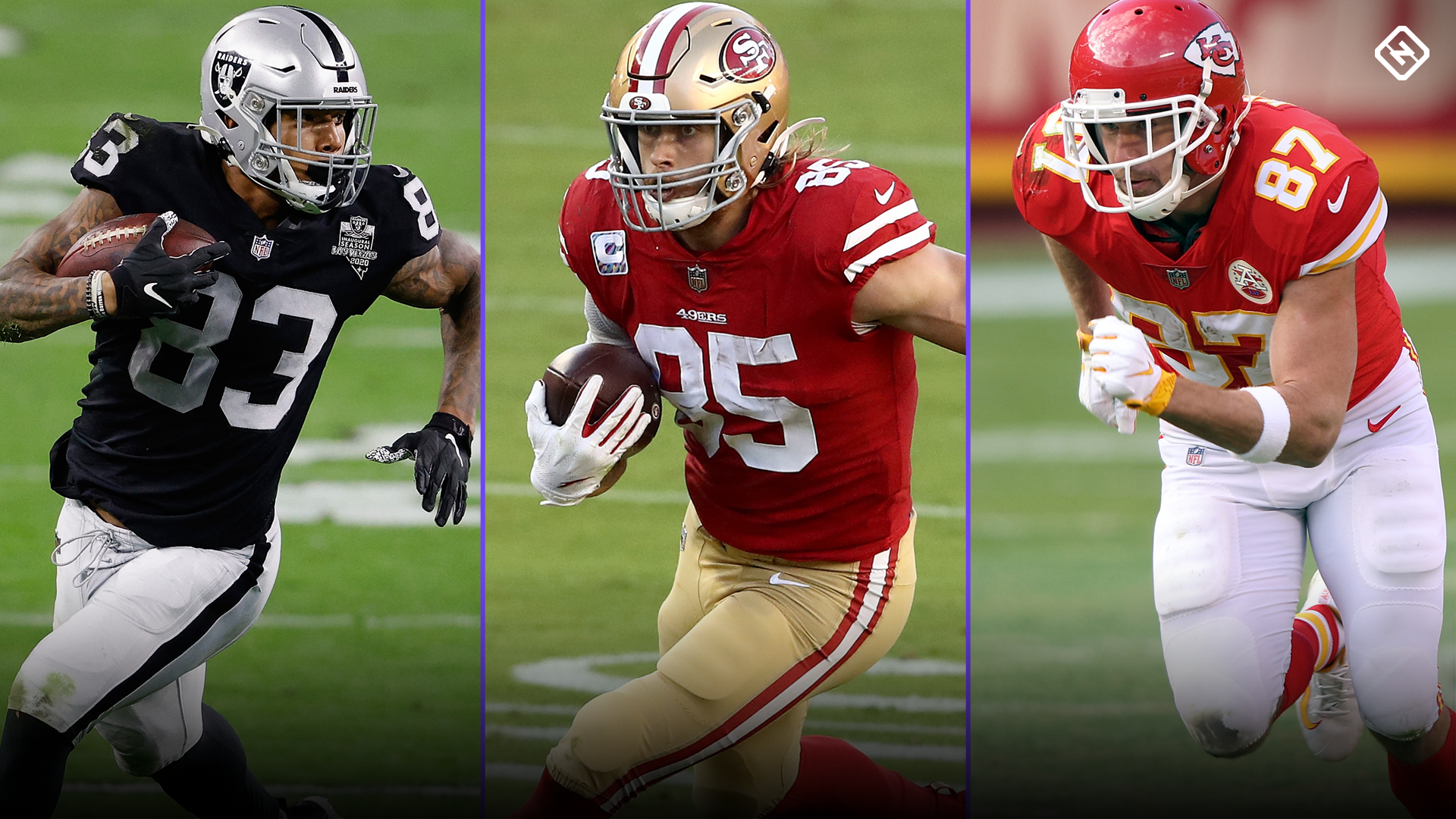 There’s no reasonable debate to be had as to who is the No.1 tight end in fantasy football across all formats. Travis Kelce is the four-time defending TE1, with a measly TE2 finish in 2017. Until we see otherwise, he remains as the set-in-stone first tight end off the board in your drafts. The real questions are: Should he be taken in the first round, and should George Kittle or Darren Waller be next in line at the position?

Below, we’ll answer those questions and provide analysis for each of the big three tight ends.

Should Travis Kelce be a first-round pick in 2021 fantasy drafts?

Kelce’s FantasyPros ADP currently sits at the last pick of the first round in standard leagues and the No. 7 pick in PPR leagues. This puts him ahead of Stefon Diggs, Najee Harris, Austin Ekeler, and DK Metcalf, among others, in standard and ahead of everyone isn’t a first-tier RB in PPR. If you’re taking him at the last pick of the first round, you’ll of course get to select one of those aforementioned studs afterward, but do you really want to leave the 12/13 turn without picking a combination of two RBs, two WRs, or one of each? It’s a nerve-racking situation.

However, you’re likely to possess a strong advantage at the TE position unlike any other. He presents WR1 value (finished only behind Tyreek Hill and Davante Adams last year) and seemingly smashes out a high number of points every week. His production is far less replaceable at tight end it is for Hill or Adams at receiver. Last year, the drop-off from WR1 to WR2 was only 1.5 total fantasy points. At tight end, the drop-off from TE1 to TE2 was 36.2 points in standard leagues. As you go down the list of tight ends, the drop-off gets even more extreme.

You can view Kelce as a top-tier WR because he produces like it. On top of that, he does it at a position where no one comes close to matching him. You can comfortably select him in the first round and take a running back with your early second-round pick. He does just as much in fantasy for you as a DK Metcalf at a position starved of value and consistency.

Is George Kittle or Darren Waller the No. 2 fantasy TE?

Kittle and Waller have quickly emerged as the top threats to unseat Kelce. That’s not to say they will, but if anybody can, it’s one of those two.

Kittle is likely in the better offense and may present the higher upside if all things are clicking for the 49ers. He’s a big play waiting to happen, and the premier YAC tight end in the league. He has two 1,000-yard receiving years to his name and seems to produce hefty numbers regardless of who’s under center for the Niners.

Since Kittle has entered the NFL, the 49ers have worked to improve their wide receiver position. During Kittle’s breakout season (2018), Brandon Aiyuk and Deebo Samuel were still playing on Saturdays; Kittle was the only adequate receiving option. Now, Aiyuk seems primed to step in as the bonafide No. 1 receiver, and a healthy Samuel could complicate the target share for Kittle. Additionally, the 49ers return a lot of key defensive players this season. As their defense shapes back into form, they should opt to run the football more, much like they did in the 2019 playoffs (where Jimmy G attempted 13.3 passes/game). Sure, it won’t be that drastic, but the passing volume should come down a bit.

Kittle also might be playing with a rookie QB for a good chunk of the year. While Trey Lance is an ultra-talented first-year player, he’s still a 21-year-old QB with just 17 career starts in college (all at the FCS level). There’s a cliche that TEs are a young QB’s best friend — sort of the ultimate security blanket — but if Lance takes over for Garoppolo and struggles, the offense as a whole will struggle. Ultimately, Lance could be a “pro” or a “con” for Kittle, but all we can say right now is he’s a question mark.

Waller is set in stone as the No. 1 option in the Las Vegas passing attack. Anytime you can have a tight end that is the first option in an offense, it’s a good thing. In 2020, Waller led all tight ends with 107 receptions, tied for the lead in targets (145), and added nine touchdowns on, too. Plus, he ranked first at the position in target share (28 percent). The Raiders’ defense should be bad, leading to a high number of passing attempts, and he already has familiarity with Derek Carr. In PPR formats, Waller definitely has a clearer path to leading Kittle in fantasy points, but he also has a case in standard formats.

Being the top option in an offense does present challenges, too. Waller surely has all the attention of the opposing defense and will often be the subject of a lot of double-coverage. In an overall inefficient offense, Waller could see down performances from time to time. His 11.2 yards/reception (15th among tight ends) leaves a lot to be desired, especially in standard.

In PPR, go Waller. In standard, toss a coin. Just kidding, kind of. It really comes down to Waller presenting the most upside because of his chance to produce like a top wideout. Kittle’s days of completely dominating target share are much more likely to come to an end, but he’ll still see high volume. Of course, you can’t go wrong with either, and it’s hard to tell who will ultimately come out on top, but Waller takes our No. 2 in PPR, and Kittle narrowly edges him in standard.

Their ADPs are nearly the same, with Waller (28.3) coming off the board just two spots after Kittle (27.0). This area of the ADP presents Josh Allen, D’Andre Swift, and David Montgomery as some of the other top options. It might sound like a hefty price to pay, but remember, TE production falls off very quickly after the top tier. It’s worth mentioning if you don’t land any of the three top guys, you’re better off waiting until the late rounds to land a sleeper TE or two to hedge your bets.