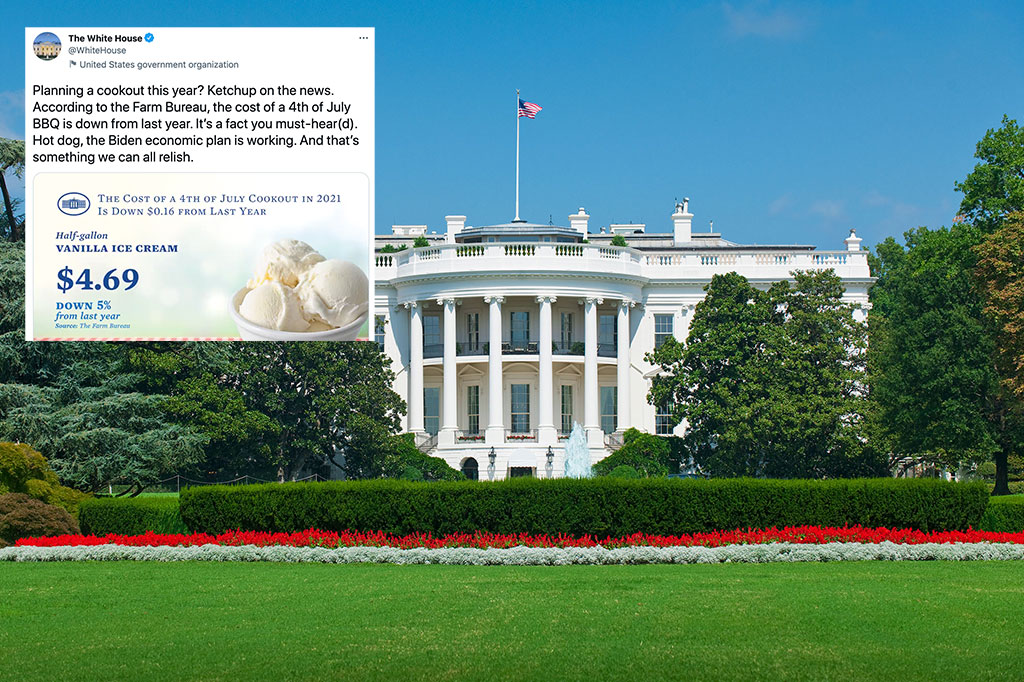 The White House social media team set off some fireworks it didn’t want Thursday when it attempted to counter inflation fears by claiming Americans will enjoy cheaper Independence Day parties this year.

“Planning a cookout this year?” the groan-worthy tweet began. “Ketchup on the news. According to the Farm Bureau, the cost of a 4th of July BBQ is down from last year. It’s a fact you must-hear(d). Hot dog, the Biden economic plan is working. And that’s something we can all relish.”

The tweet was accompanied by a GIF laying out the price change for select food items. Among them: the cost of two pounds of ground beef is down 8 percent on last year, the price of a pound of sliced cheese and a 13-ounce bag of potato chips are both down 1 percent, and the cost of a half-gallon of vanilla ice cream is down 5 percent from 2020.

The savings for the whole meal: 16 cents.

However, it seems the White House social media team forgot to check in with the US Department of Agriculture (USDA) before posting the claim. Last week, the USDA noted that the consumer price index for grocery store and supermarket food purchases was up 0.7 percent over May of last year. The USDA also projected that grocery store and supermarket prices would increase between 2 and 3 percent this year.

Earlier this month, the Labor Department reported that its Consumer Price Index showed that inflation had gone up 5 percent since May 2020, the largest 12-month increase since a 5.4 percent bump for the period ending in August 2008.

Twitter users of all political persuasions expressed outrage at the spin attempt.

“This reminds me of the passage in [George Orwell’s novel] 1984 where they celebrate the chocolate ration going up when it actually was reduced by 10 grams,” former Republican National Committee official Liz Harrington said.

“With an unprecedented humanitarian crisis at our border, soaring gas prices, and more out of control spending that will cripple our future generations, the Biden Administration is bragging about saving us $0.04 on sliced cheese,” lamented Rep. Burgess Owens (R-Utah).

“[I]’m the guy who voted for Biden so cheese prices would fall 1 [percent], this is better than universal healthcare,” one liberal Twitter user quipped.

Others noted that the Biden administration’s triumphant claim didn’t appear to take the cost of driving to and from the store or cookout into consideration.

“Good news: you can save 16 cents on the groceries for your cookout this year,” tweeted Rep. Jerry Carl (R-Ala). “Bad news: the gas to get to the store will cost you 42 [percent] more than last year.”

AAA reported Thursday night that the national average price for a gallon of regular gas had risen to $3.12, the highest it’s been on Independence Day weekend since 2014.

“Today, 89 [percent] of U.S. gas stations are selling regular unleaded for $2.75 or more,” AAA spokesperson Jeanette McGee said in a statement. “That is a stark increase over last July 4 when only a quarter of stations were selling gas for more than $2.25.”