Number one-ranked lightweight contender Dustin Poirier didn’t feel Conor McGregor’s strength in their rematch at UFC 257. In recently released unseen backstage footage from the immediate aftermath of UFC 264, Poirier can be seen telling his team that he didn’t think McGregor was strong.

After knocking out Conor McGregor in their main event clash at UFC 257, Dustin Poirier described the fight to his teammates and coach Mike Brown in the dressing room. Poirier said he didn’t feel McGregor’s physical strength when the pair were engaged in a clinch against the fence in the first round.

According to Poirier, he was a little overwhelmed during the clinch which is why McGregor managed to get himself free. ‘The Diamond’ also mentioned he was surprised at how easily he was able to take the Irishman down during the fight. Poirier claimed that McGregor also told him that he was hurt the most by the very first calf kick Dustin threw in the fight:

“Mike, the first calf kick I threw which landed, that was the hardest one. It was the top of my shin you know, the heavy part. He was hurt, he was hurt. Two or three more rounds and I would have stopped him with a leg kick. He’s not strong. On the fence, I don’t know why but I was kind of in awe, a little bit that he’d go down so easy but I was like surprised how…he’s not strong.” 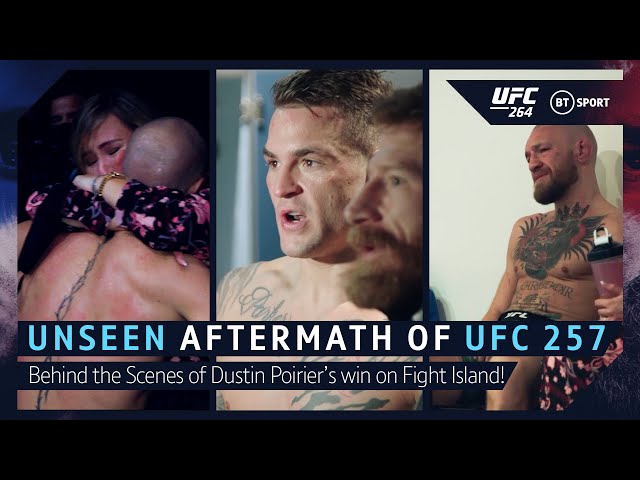 Dustin Poirier is keen to prove that he is a better fighter than Conor McGregor. He already knocked out the Irishman earlier in the year and will be looking to do the same when the pair lock horns this weekend at the T-Mobile Arena in Las Vegas. With a knockout victory over McGregor just six months ago, there’s no doubt Poirier holds the edge heading into the fight.

UFC president Dana White recently stated that Poirier is currently hungrier than McGregor and desperately wants to win the trilogy fight this weekend.

Who do you think will earn the bragging rights at UFC 264? Sound off in the comments.