Dan Hardy has explained how Conor McGregor’s gameplan against Nate Diaz at UFC 202 could help him in the trilogy fight with Dustin Poirier.

In his breakdown of the upcoming fight between Conor McGregor and Dustin Poirier, Hardy suggested that McGregor ought to give Poirier more to think about than just a left hand.

Hardy indicated that using low kicks, giving Poirier different looks rather than just trying to land a big left hand, and getting Poirier to throw the jab and countering it with a big left hand is what Conor McGregor needs to do.

“Now, if we go back to another time he (Conor McGregor) fought a southpaw, in a fight you all know well, against Nate Diaz (at UFC 202) he was able to dismantle that lead leg. Because much like Conor McGregor, and much like Dustin Poirier, he (Diaz) is heavy on the lead leg. So, as you can see here, straight out the gate, McGregor throws two hard low kicks.”

“Then once he started that narrative, once that leg is damaged, like it is here, then he can start adding other things onto it – Because now he’s giving his opponent multiple things to think about. And the other benefit to doing this as well is because when he’s fighting a southpaw, he wants to get them to throw their jab, so he can counter over the top. It’s much easier to use that momentum when they’ve committed.”

“If you damage that lead leg, when you step on that leg, to be able to bring that foot back to get out of the way of a counter is such a difficult thing to do. So, McGregor plays on this in the Nate Diaz fight. He batters that lead leg to make him an easier target. So, what we see here is McGregor has got him back against the fence; lovely counter over the top but just doesn’t quite land. But when he goes for the low kick and now Nate steps hard on the jab, watch the counter difference; catches him right on the chin, takes his legs away.” 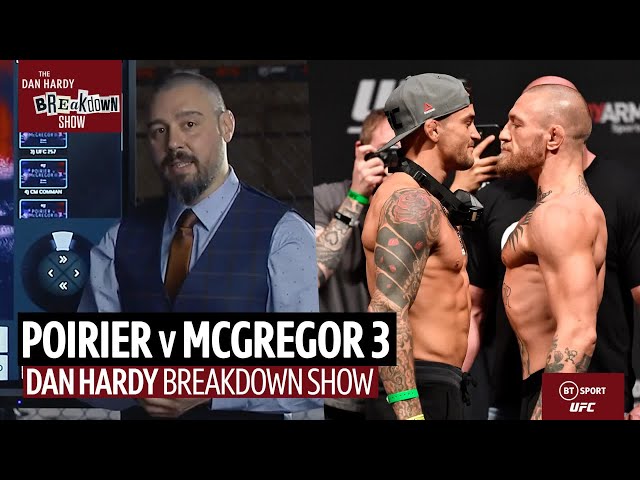 In a nutshell, Dan Hardy consistently highlighted that Conor McGregor cannot adopt a one-dimensional attack against Dustin Poirier at UFC 264.

Hardy reiterated that McGregor needs to use weapons other than his left hand and disguise that particular shot behind them in order to land it.

Hardy noted that as a general rule-of-thumb in McGregor fights, his opponent’s aggression generally works in his favor, due to the incredible quickness of his counters. Hardy said:

“It’s a benefit to him (Conor McGregor) if you’re aggressive towards him because his counters are so much quicker than his opponents.” (*Video courtesy: BT Sport; H/T Sportskeeda for the transcription)

Conor McGregor and Dustin Poirier are 1-1 in their series of fights thus far. Their trilogy fight is set to take place at UFC 264 on July 10.