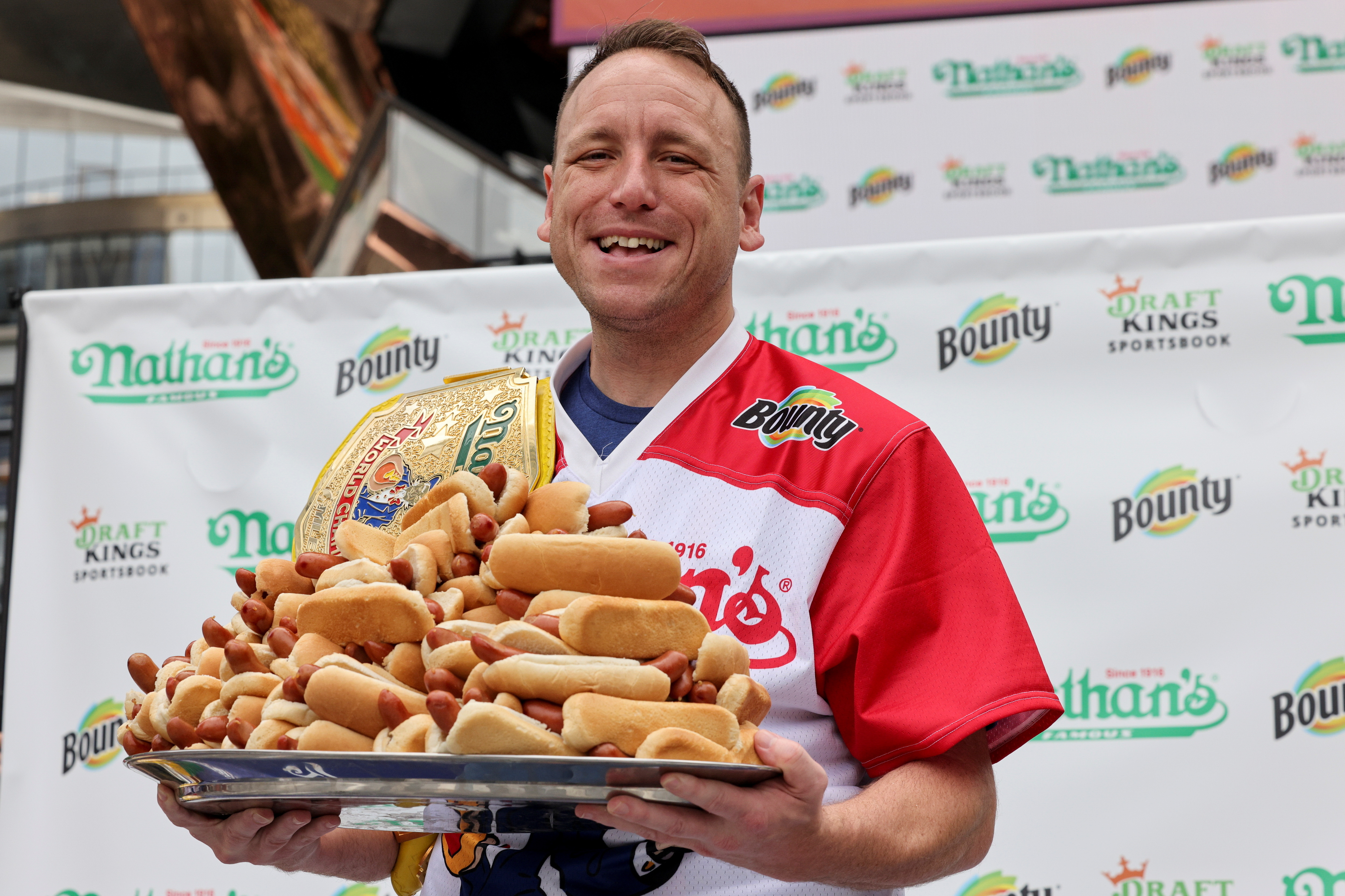 When it comes to dominating the competition, Joey Chestnut is in a league of his own. Chestnut, 37, stands 6-foot and weighs 230 pounds. He is ranked No. 1 in the world in Major League Eating. Chestnut has won the Nathan’s Hot Dog Eating Contest 13-times running, including the last five consecutively. Last year, when the annual Fourth of July tradition was held indoors during the pandemic, Chestnut scarfed down 75 hot dogs to set a new all-time record.

Chestnut is listed as a whopping -3335 favorite at DraftKings and -3000 at BetMGM to win this year’s competition, which will be held on Sunday at 11 a.m. This translates to an implied probability of 97.1 percent that Chestnut will win. If you think someone can shock Chestnut like the Giants shocked the undefeated Patriots in 2007, the field is listed at +900 at DK and +1000 at MGM. This massive gap in betting odds speaks to just how dominant Chestnut is compared to his competitors.

Despite being a virtual “lock,” there is little to no value in backing Chestnut. The price is simply too high. You have to risk so much to win so little that the juice really isn’t worth the squeeze.

So instead of betting on Chestnut to win, the smarter play might be to focus on the total number of hot dogs eaten by Chestnut.

DraftKings and BetMGM have set the Over/Under at 73.5 dogs.

In a recent interview on VSiN’s “Follow the Money,” Chestnut shed light on why he seems to be aging like a fine wine.

“I am getting older, but I know my body so much better,” he said. “: know how to push myself. I feel like I’m finding new ways to do it. I’m pretty sure I can beat [the world record of 75].”

One of the variables that bettors must consider is that this year’s competition will go back to the boardwalk of Coney Island instead of being held indoors. Some have hypothesized that the outdoor heat and lack of air conditioning could provide a muggy and unpleasant atmosphere, which is why the under 73.5 might be worth a look at a +120 payout.

“It didn’t hurt,” Chestnut said of being indoors last year. “Not being outside in the humidity probably helped me a little bit.”

However, last year’s competition was also held without a crowd, along with limited participants. Will more competition and hundreds of cheering patriotic fans provide Chestnut a boost?

“There’s gonna be an audience this year, I’m so excited to be in front of a big crowd.”

Bettors taking the Over will be able to track Chestnut’s pace along the way. According to Chestnut, in order to break the world record he will need to eat 19 hot dogs in the first 1.5 minutes then at least 48 at the 5-minute mark. If that happens, Chestnut knows “that the record should be going down.”

Bettors looking to bet the total number of dogs should pay close attention to the juice. The BetMGM Over 73.5 is priced at -165 and the Under +120.

On the women’s side, Michelle Lesco is a -1000 favorite to win the competition (91 percent implied probability). The field is +500. Miki Sudo, who has won the competition for the past seven years, will not be competing this year.

Learnings for West Indies from the South Africa T20Is ft. Horrendous spin show and the rise of Fabian Allen
VVS Laxman feels the Lankan trip will be a great learning experience for the Indian youngsters
Comment