Sayu’s recent voice actors have sparked an interest among the Genshin Impact community, especially since Lilypichu and SUZAKI Aya are prolific names.

Lilypichu has 2.8 million subscribers on YouTube and 1.4 million followers on Twitter, making her one of the most prolific people to voice a character in Genshin Impact.

It’s worth noting that this is only for the English dub of Genshin Impact, as Sayu will be voiced by other voice actors in the other formats.

SUZAKI Aya is the Japanese voice actress for Sayu in Genshin Impact. She is best known for her work as Mako Mankanshoku in Kill la Kill, Tamako Kitashirakawa in Tamako Market, and Minami Nitta from The Idolm@ster Cinderella Girls. 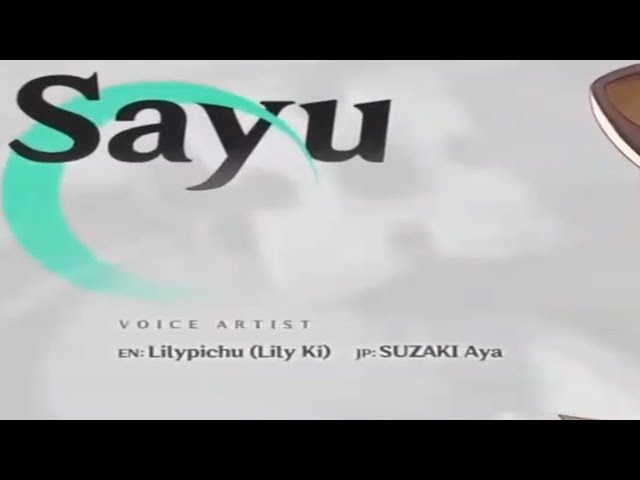 Sayu’s skillset was leaked a long time ago, but many Genshin Impact fans were surprised to see Lilypichu be revealed as the English voice actress. Normally, it’s the Japanese voice actors that capture the attention, but Lilypichu’s fame has made her a surprising choice to talk about.

Of course, SUZAKI Aya has an extensive career in voice acting, having done several works for popular animes and video games. Her name is sometimes spelled out as Aya Suzaki, but the Genshin Impact reveal shows it as SUZAKI Aya.

Lily Ki, her real name, is part of an online group of content creators known as Offline TV. She’s best known for her YouTube channel, where she does vlogs and various gaming videos.

Some of Lilypichu’s popularity stems from the combination of anime and music talent, which makes her appeal more to a younger audience. She has 2.2 million followers on Twitch, and has even streamed Genshin Impact in the past.

This won’t be the first time Lilypichu has done voice acting, either. She has done a few advertisements and small roles in the past, like Megumi Okura from Cardfight!! Vanguard: overDress.

Who is SUZAKI Aya?

SUZAKI Aya is affiliated with I’m Enterprise, a voice talent agency in Japan. Unsurprisingly, she has found a lot of success in various roles through her voice acting, with the image above showcasing some of the characters she has voiced.

Unlike Lilypichu, SUZAKI Aya is solely known for her voice acting. Still, several anime fans love the fact that she will be voice acting for Sayu in Genshin Impact, particularly because of her past roles.