In the main series games, Eldegoss doesn’t really have much of a place in battling meta. In Pokemon Unite, it has already carved itself a spot as a much-needed healer Pokemon. 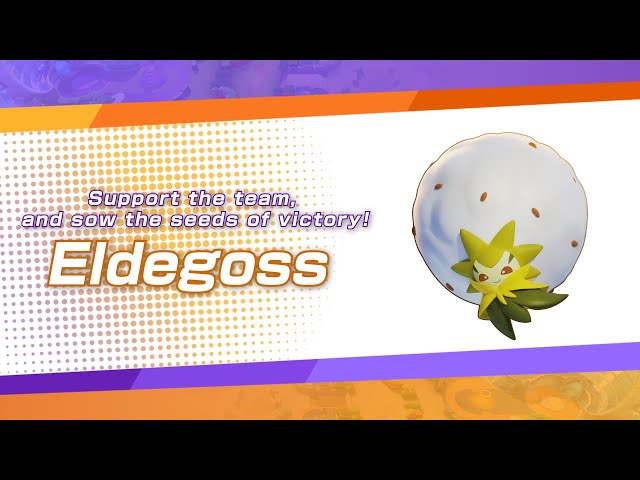 Eldegoss can truly be the difference between hanging on for victory or falling short in defeat. As a ranged attacker, it can keep the team tip-top while always dealing damage and staying safe.

There are only a few support characters in Pokemon Unite. Starting as Gossifleur, it will evolve into Eldegoss at level 4.

Its ability is Cotton Down. This damages opponents and decreases their movement speed for a short time after Eldegoss receives a certain amount of damage. It also recovers HP and becomes quicker.

The early game calls for damage and slowing effects over healing. Leafage is a good opener. It plets targets with leaves, slowing those hit for a short time.

After evolving at level 4 in Pokemon Unite, Eldegoss should go with Pollen Puff. Pollen Puff attaches to Pokemon, dealing damage to enemies and healing allies.

Cotton Guard is the way to go at level 6. It protects nearby allies with cotton that absorbs hits and restores HP when the move ends.

The final attack is its Unite Move, Cotton Cloud Crash. Eldegoss floats into the air, becoming invincible. Once used again, the Pokemon slams into the ground, dealing damaging, shoving enemies and healing teammates in the AOE.

Exp. Share is great on Eldegoss in Pokemon Unite. It passively gains the user EXP while they are at the lowest level on the team. It does forfeit any EXP gained against wild Pokemon if you aren’t the final blow.

Shell Bell is another important held item for Eldegoss. Special attacks heal it by 45 HP. On top of that, a percentage of its Special Attack stat is added to the 45 HP healing number.

Buddy Barrier is an incredible held item for Eldegoss. Teamwork is important in Pokemon Unite. This item, while using a Unite Move, shields Eldegoss and the nearest ally with the lowest HP.

The battle item should be the Potion. It is simple, yet very effective. Eldegoss can focus on healing allies with moves and itself with Potion. A small amount of HP is restored when used and it can be used over and over with a small cooldown.