A.J. McKee shocked the world at Bellator 263 as he beat Patricio ‘Pitbull’ Freire in the first round of their featherweight title fight. ‘Mercenary’ extended his unbeaten streak to 18 wins and now sits at the top of the toughest division in the entire organization.

He spoke to the media in his post-fight press conference and revealed his plans for the near future. When a reporter asked him if he’d fight again at featherweight, McKee responded that he’s done with the division. He also called himself the best featherweight on the planet and said:

A.J. McKee followed up his talking by putting up the one million dollars he won against any featherweight who was willing to take him up on it. He wants to have some super fights and said:

“I got a million dollars cash in my bank. I’m willing to put that up against anybody else. I’m sure Showtime, Bellator they’ll match it. Let’s do some super fights, let’s get some big stuff going, let’s change the sport like I’ve been saying. We can do it, unify these belts.”

With this win over Bellator poster boy ‘Pitbull’, A.J. McKee is on the path to greatness. He might plan to go up to lightweight and grab another belt from Pitbull, but a move to UFC might make sense too.

Nevertheless, he is quickly becoming the most successful fighter in Bellator MMA. When asked if he believed he was the face of Bellator after the win, A.J. McKee had only one answer.

“Hands down. I been the man since I stepped in this cage,” he said. 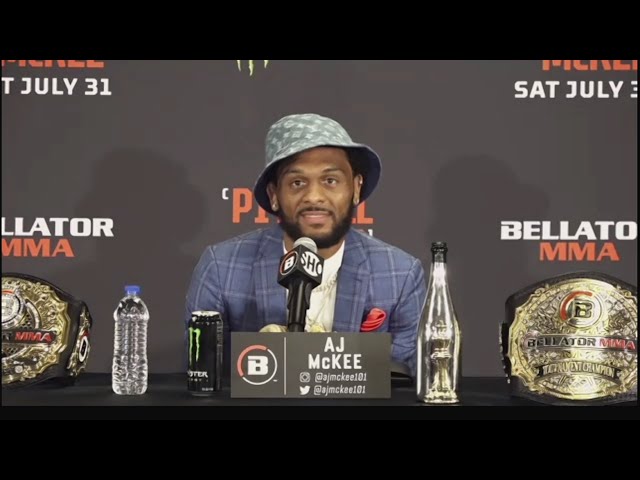