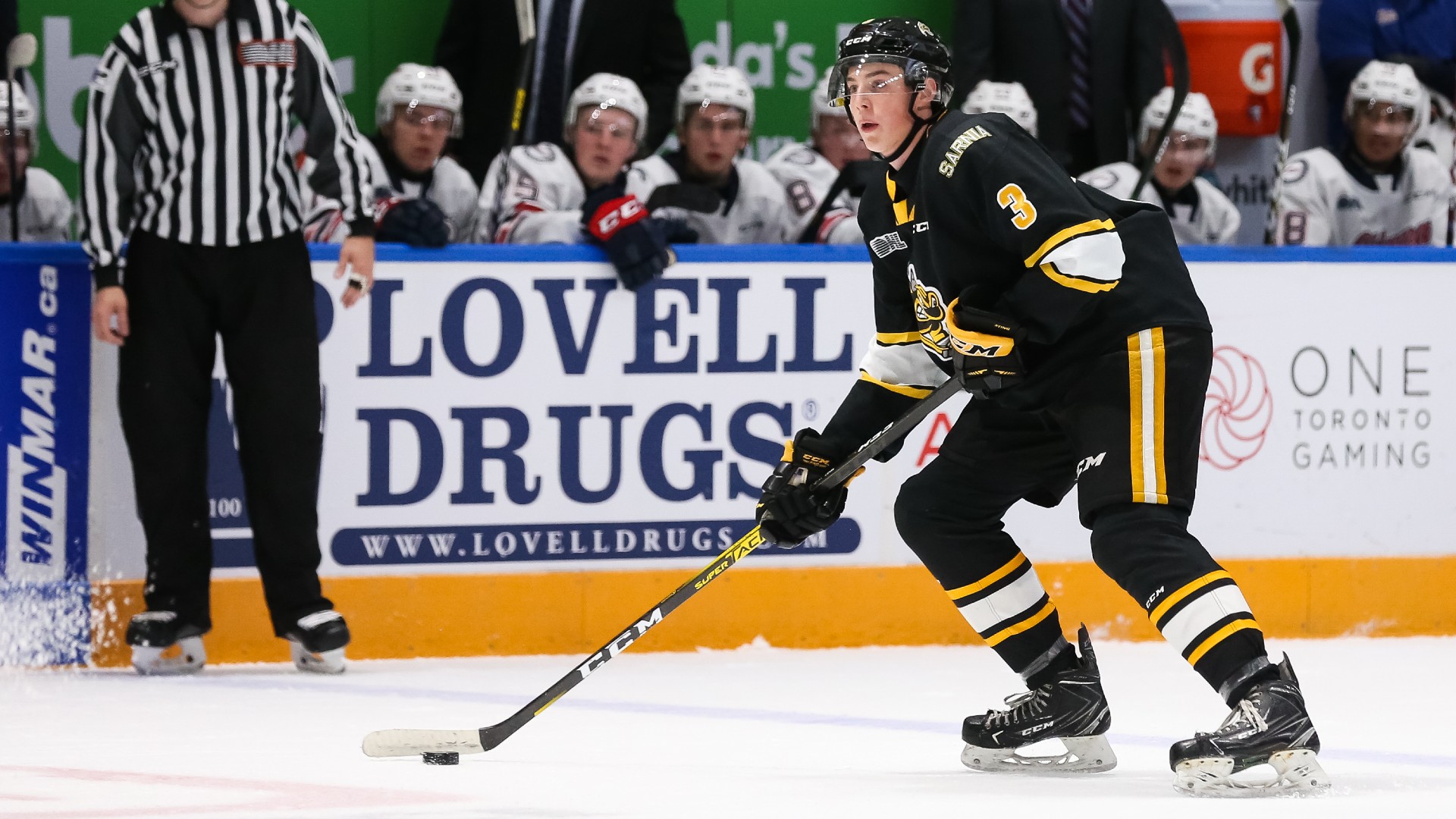 Want to compete for the Stanley Cup? Hit on your first-round pick. Then the second-rounders and those thirds, fourths, fifths, sixths and sevenths, too. Find yourself some sleepers.

Why? Look no further than the Lightning.

Nikita Kucherov? He was the No. 58 pick a decade ago. Ondrej Palat went at No. 208 the same year. Brayden Point was picked 79th overall in 2014. Anthony Cirelli went in the 72nd slot in 2015 and Stanley Cup-clinching goal-scorer Ross Colton was No. 118 in 2016. None of these picks appeared perfect on draft day. But those sleeper swings look a lot like home runs now after back-to-back Cups.

Hammering out some potential pieces at the NHL Draft has never been more important, and there are definitely some big swings to be had in the 2021 class.

While no one can say for certain which prospects will pop, here’s a rundown of five candidates that could very well turn into some grand slams down the road if selected during the 2021 NHL Draft that will be held July 23-24.

Suomi is a sleeper in that he has the ability to eventually outplay his draft position. But if he slides, it won’t be because teams are sleeping on him. He plays a loud game and therein lies the rub.

“Fast, puck-moving defensemen are becoming more and more valuable in the NHL, and Suomi plays that style of hockey,” FCHockey scout Derek Neumeier said. “Not only does he have quick feet and quick hands, he also has an attack mentality. He loves having the puck on his stick and can create space for himself with it, sometimes making opponents look foolish as he escapes their pressure.”

There aren’t many defensemen in this draft who are more high-risk, high-reward than the 5-9, 147-pound rearguard who scored at over a point-per-game pace in junior with Jokerit this season. When he’s feeling it, things go very, very well. He’s pure skill. When he’s struggling, Suomi’s awareness and decision-making are absolutely absent, making him a massive liability.

“It’s a very high-risk style of play, and Suomi gets himself into trouble more than you’d like to see,” Neumeier added. “He will occasionally make the wrong read or try to force a play that isn’t there, and the result is often a turnover.

“He’s a risky pick because of how much development work needs to be done. If he can maximize his skills and playing style while also cutting down on his mistakes he could become a niche NHLer one day.”

Teleguine, who tiptoed towards a point-per-game pace this season, might be the draft’s forward version of Suomi.

He’s got as dynamic a skillset as any player ranked outside the top 100 for the 2021 draft, and is one of Western Canada’s most dangerous and fun players to watch in this class. His skating is top-notch and his vision and playmaking ability are more than attractive.

“He has the makings of an elite skater and has great vision with and without the puck,” noted FCHockey scout Justin Froese. “He has a great expressive skill set and attacks deceptively to open up lanes. To be honest, I thought that the numbers could have been a lot better but I love how dynamic he is.”

With the puck on his stick, Teleguine is dynamic. Without it, not so much. The 5-10, 183-pound center struggles to commit himself when he isn’t the go-to play driver for his team and is a liability in his own end.

“How hard he works away from the biscuit or cheats for offense makes him a bit of an enigma,” Froese said. “But the elements of skill are real.”

MORE: Build your own custom NHL Draft rankings at FCHockey

Boyd doesn’t have the high-end offensive skill to keep pace with the likes of Suomi and Teleguine when it comes to tangible talent. He did manage just 10 points (seven goals, three assists) this season.

But there’s something there that teams covet.

“Detractors will point out a lack of refinement in many areas of his game … puck skills, skating, playmaking, vision,” began FCHockey scout Shaun Richardson. “That being said, I describe him as not talented at what he doesn’t do, and elite at what he does do.

“He’s a player who is enthusiastic about the forecheck and loves laying the body and creating turnovers. He’s a bit of an ugly skater but he’s still fast. In front of the net, he’s hard to move. [He] plays with anger and seems to take players battling him as a personal offense.

“He’s a momentum-shifter when his team can’t get going,”

Boyd is always willing to engage the opponent, and at 6-3 and 205 pounds, most of his interactions are of a punishing nature. Mix in some untapped offensive potential and Boyd could be a late-round steal that eventually carves out a role at the bottom of an NHL lineup.

“Players like Boyd are less common than they used to be so that increases his value,” Richardson said. “He can play his role effectively on limited minutes and produce points, too.”

Mast has all the ingredients.

Size? He’s 6-4 and 210-pounds. Skating? He shows a strong two-step burst that gets him up to top speed quickly. Instincts? He’s not shy to jump into the play to add a second layer of offense to the attack and he knows when to transition back to defense.

As an early-January 2003 birthdate, there’s still plenty of room for growth and development, too. And he’ll need it. He missed an entire season in the Ontario Hockey League due to the pandemic.

“Mast has the size and aggressiveness to project him as a second- or third-pair defender with some power-play potential,” said FCHockey scout Joseph Aleong. “His play as an OHL rookie was impressive but overlooked on a struggling Sarnia team. If he can help lead a developing defense group next season in all situations, it would solidify him as a potential future NHLer.”

It should be noted that he isn’t without his required areas of growth too. Knocks on the proficient young player include a penchant for turning the puck over and poor decision-making. That’s the risk-reward with a potential sleeper like Mast.

“He is still quite turnover-prone and the same aggressiveness that makes him an offensive threat in transition can also lead to scoring chances against,” Aleong added. “Mast’s size, skating and offensive instincts are all traits scouts look for in NHL draft picks, particularly given the scarcity of his position as a right-shot defender.”

MORE: Run your own custom mock draft at FCHockey

Ertel is a deep cut in this year’s draft, having played in the Maritime Junior A Hockey League before he heads off to Cornell next season. But he’s not going under-scouted, and it’s an unrefined power game that could have teams wondering how he slid so far on draft day.

At 6-2 and 190 pounds, Ertel has that coveted size and build, and he’s shown he can produce with his off-the-rush ability to drive to the net after pushing wide on defenders and firing off a convincing shot.

“Absolute upside for Ertel is his ability to take pucks to the net,” Richardson said. “He is so good at net drives because of his speed, he can get around the corner on the defense, and a combination of size and strength gives him very good puck protection skills.”

Speed and power is a fashionable combination that never goes out of style. With 28 points (nine goals, 19 assists) last season with Summerside, production isn’t exactly frowned upon these days, either.

But there’s also a reason Ertel ranks more among the sleeper class than the sure-fire segment of the draft.

”For Ertel, he will have to get a little stronger to play that net drive game but the big issue is that his speed through the neutral zone will have to improve to maintain the ability to create offense off the rush,” Richardson noted. “His lack of explosive speed means he will need to also improve his timing and puck support so he is able to get pucks while in motion.”

Aaron Vickers is the managing editor of FCHockey.